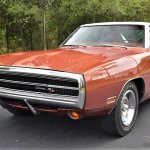 Driven fewer than 30,000 miles in 50 years, this 1970 Dodge Charger R/T is a rare example of a desirable muscle car with matching numbers and in largely original condition.

The Pick of the Day, this Dodge Charger coupe packs a big-block V-code 440cid V8 with triple 2-barrel carburetors, which was factory rated at 390 horsepower and 490 pound-feet of torque. The beefy engine in this car has been tweaked with a Hemi purple cam and cylinder heads that have been ported and polished, and shaved .004 of an inch to raise the compression, plus a set of chrome valve covers.

The 440 Six Pack is linked with the factory-equipped 727 automatic transmission, making it one of just 337 Chargers produced in this configuration, according to the Elkhart, Indiana, dealer advertising the Dodge on ClassicCars.com.

“A couple other nice performance options that this great R/T possessed from factory are the power front disc brakes, Hemi torsion bars, Hemi rear springs, 4:10:1 Dana 60 rear axle with sure grip, and 26″ max cooling radiator,” the dealer says in the ad.

The Charger has had just three owners since new, all of whom endeavored to keep the Dodge in original, unmolested condition, the dealer says. Total mileage for this Dodge is 29,754 showing on the odometer, which the dealer says is correct.

“Originally a stripe-delete car, the bumble stripe was added when repainted. Another item to note is the bumble bee decals on the rear side windows were installed when the first owner joined the Scat Pack club.

“Included in the sale of this great Charger R/T is the original owner’s manual, code breakdown by Rapid Pack, and an original broadcast sheet.”

The Dodge Charger R/T is a special example of a well-cared-for, very low-mileage and highly sought-after 440 Six Pack hardtop.  The asking price of $114,995 is at the top of the range for this model, but likely worth it considering its originality.