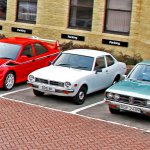 Mitsubishi Motors is sending its entire 14-vehicle UK heritage fleet to auction, and at no reserve.

The company gave no reason for the sale but said the cars will be offered in an online Auto Auction-run event throughout the month of April.

Among the cars being sold are two of the earliest registered in the UK, a Colt Lancer and a Colt Galant, the brand’s flagship sports cars of the 1980s and ‘90s, a Starion Turbo and a 3000 GT, as well as a Mitsubishi Jeep and Mk1 and Mk2 Shogun off-roaders.

However, the vehicles that are likely to draw the most interest are a trio of Lancer Evolutions, “all with low mileage and maintained to the highest standards,” Mitsubishi said. The cars represent the three generations of the Evo and include a Lancer Evolution VI Tommi Makinen Edition example.

The auction catalog and introductory films featuring racer Tiff Needell are available on the auction website.