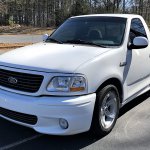 As it turns out, Lightning can strike twice.  The first Ford Lightning performance pickup was so successful with consumers that Ford rolled out the same “Special Vehicle Team” treatment for the subsequent generation of the F-Series.

The Pick of the Day is a 2000 Ford SVT Lightning F-150 listed for sale on ClassicCars.com by a private seller in Rock Hill, South Carolina.  And while this truck came out of the factory with high-horsepower tweaks, it also has been treated to some extra muscle.

The Lightning is part of Ford’s lineup of F-Series pickups first launched in 1948 and quickly becoming part of many American households, farms and work places.  As of 2021, the F-Series has evolved into its 14th generation.  To top that off, the F-Series has been the best-selling pickup in America for 44 years, and the best-selling of any vehicles – cars or trucks – since 1981.  It’s no wonder those trucks seem to cover every construction site, roam every ranch and haul down every highway.

Aside from making the F-Series a utilitarian cargo-hauling favorite, Ford’s engineering team decided to have a little fun in the early 1990s with a hot special-edition model.  The Ford SVT Lightning came to life for model years 1993 through 1995 as a sort of F-150 on steroids, juiced up thanks to a model-specific 5.8-liter V8 that pumped out 240 horsepower, with a heavy-duty transmission to handle the extra power.

For the second-generation Lightning, produced by Ford from model year 1999 through 2004, power was provided by a supercharged 5.4-liter V8 that delivered 360 horsepower.

This white Lightning possesses not only the standard performance equipment but has been treated to some upgrades.  The seller lists out some of the goodies, in addition to an Eaton supercharger, that include Accufab intake plenum and Airaid cold air, SCT max airflow meter, Bassani shorty headers and high-flow cats, and Borla stainless exhaust.

The list goes on and on, and the end result is a Lightning that’s capable of pushing 406 horsepower and 475 pound-feet of torque, as determined by dyno testing, according to the seller, who didn’t forget about creature comforts to go along with the upgrades, such as a Kenwood 7-inch in-dash DVD/CD system with Bluetooth.

“The interior and seats are in excellent shape,” the ad states. “The exterior body is exceptional.”

The truck has been driven 75,000 miles since new, the seller notes.

While it’s unlikely that any Lightning would be put into service as a heavy hauler, the seller states that the bed is fully Linex-lined. Just be sure to strap the cargo down before hitting the gas.

The seller is asking $21,900 or best offer for this high-performance pickup.

The post Pick of the Day: 2000 Ford SVT Lightning, from workhorse to racehorse appeared first on ClassicCars.com Journal.