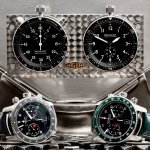 As part of the celebration of the 60th anniversary of the Jaguar E-type coupe and roadster, the automaker has cooperated with Bremont to produce a set of watches and with The Glenturret distillery to release the E-type whisky.

However, both products will be produced in limited supply, with 120 examples of the watch and rally timer and with 265 bottles of the beverage.

It was in March 1961 that Jaguar unveiled the original E-types, a coupe in gray and a roadster in green. Enzo Ferrari called the E-type the most beautiful car design to date.

There will be a series of 60th anniversary celebrations and commemorative vehicles, including the Bremont chronograph and rally timer, with only 60 in gray and 60 in green, and the whisky, the 265 bottles representing the horsepower rating of the original car’s inline 6-cylinder engines.

The Bremont watch and rally timer come as a boxed set. The rally timer is a first for Bremont and combines a clock, stopwatch and tachymeter, and can be displayed on a stand or fitting into a customer’s car, according to the news release.

In addition to purchasing the timepieces, buyers will be invited to drive three classic E-type vehicles if they visit the Jaguar Fen End facilities in the UK.

Bremont was established in 2002 to produce pilot’s watches inspired by historic aircraft. It also has done a line of Jaguar-inspired wristwatches.

Meanwhile, The Glenturret E-type 60th Anniversary Single Malt Scotch Whisky “is crafted at the oldest working distillery in Scotland, to evoke the charisma and spirit of the E-type. Each bottle bears a design from Jaguar Classic and is presented in a custom wooden box, together with a bespoke book and key ring.”

“It has a complex nose, sweet and oily with dark fruits, dried ginger and clean oak,” Bob Dalgarno, The Glenturret whisky maker, is quoted in the news release.