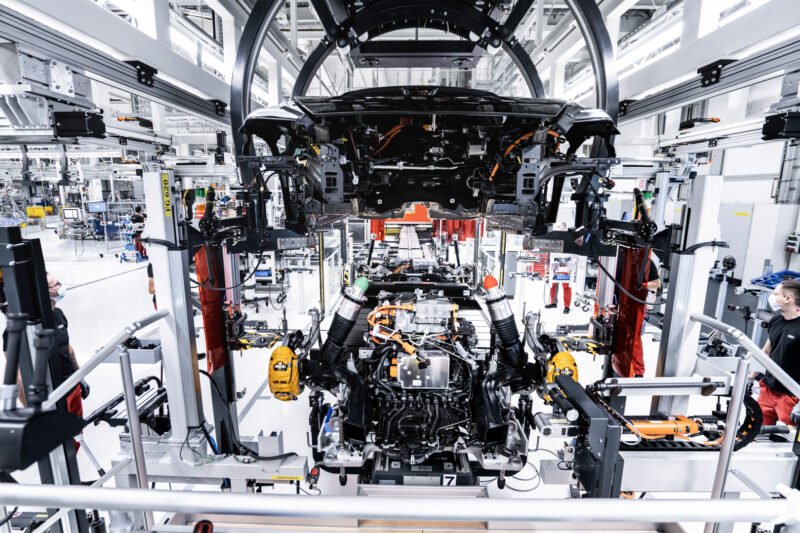 We recently saw some spy photos of what looked to be an Audi Q6 e-tron, doing some heavily camouflaged testing. At the time, we didn’t have any information on whether or not it was, in fact, an Audi Q6 or if it was something else. However, according to this new report from Auto Express, Audi CEO Markus Duesmann confirmed the Q6 e-tron’s existence.

It won’t be alone, though, as the upcoming Porsche Macan Electric will also be built on the PPE architecture and share much of its mechanical bits with the Q6.

When it debuts, the Audi Q6 e-tron — as well as all PPE-based vehicles — will get 800-volt capabilities and therefore will be capable of 350 kW DC fast charging. It’s also possible that the Q6 e-tron has over 300 miles of maximum range, though there are likely to be a few different battery options.

The Audi Q6 e-tron will launch in 2022 and production will happen at Audi’s Ingolstadt plant. What’s interesting is that Audi is tearing out a lot of Ingolstadt’s traditional car assembly lines and replacing them with PPE assembly lines, effectively turning the plant into an EV plant. This revamping of the Ingolstadt plant will also include in-house battery development.

This is just part of Audi’s planned electric offensive, as the brand is planning on launching 20 new EVs by 2025. Considering we’ve heard of three so far; the Audi e-tron GT, Q4 e-tron, and now the Q6 e-tron; expect around seventeen more to debut in the next few years.

The post Audi Q6 e-tron Confirmed by CEO, Will Launch in 2022 appeared first on QuattroDaily.