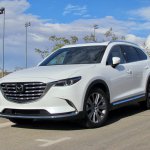 When last we met the Mazda CX-9, we found it to be “3 rows of fun for the family, and the driver… a road-trip ready vehicle that you actually can enjoy driving.” That was a 2020-model-year example in Signature AWD trim.

Recently, we spent a week in the latest version of the crossover/don’t say station wagon (which is what such vehicles really are).

So what’s changed? Well, Mazda points out that the new and standard 10.25-inch center display screen features the latest-generation Mazda Connect infotainment, has new exterior styling and interior seating, and adds that there’s a new Carbon Edition with “unique styling and premium features.”

What hasn’t changed is the powertrain, which means the 2.5-liter turbocharged 4-cylinder engine pumps out 250 horsepower and a whopping 310 pound-feet of torque, which reaches all wheels through a 6-speed automatic transmission. And speaking of torque, there’s enough to overpower the front wheels and produce torque steer should you be turning as you pull away from a stop.

Yes, Mazda says the “predictive i-Activ all-wheel drive” set up has G-Vectoring control Plus as well as off-road traction assist, but punch the throttle off the line and turn the steering wheel an instant later and you better hold on tightly because the torque wants to take control of the 20-inch Falken Ziex CT50 all-season tires.

As far as the new interior is concerned, my passengers — primarily grandchildren aged 6, 10 and 15 — really like the changes, and the 10-year-old was kind enough to teach me how to change the radio station with the controller on the center console.

She also liked the new quilting and piping styling of the front- and second-row seats, and how even the second row is heated. By the way, the seats are covered in luxurious Nappa leather, and the interior trim is Santos Rosewood.

Among features I appreciated were the rear lift gate that powers itself open and closed, and the fact that there’s some usable storage room behind the occupied third row, and even more storage hidden underneath.

I also like the new big screen, though personally I’d prefer such a screen to be mounted vertically rather than horizontally when I’m depending on the navigation system to show me where I’m headed. What’s ahead is much more important to me when traveling than what might be off to the left or right.

I also don’t understand why the center console storage lid is split, each side opening independently, which means that when you want to put something in or out, you have to press two buttons rather than one.

I still find the CX-9 to drive smaller than it is, which is a good thing. It’s nimbler than a more truck-styled SUV, almost shooting-brake in its styling and dynamic performance. The turbocharged engine ignites immediately and accelerates quickly off the line.

And if I have to be honest, I’ll admit that I like that the CX-9’s dynamic performance includes some torque steer, a blast from the past and the era when everything about driving wasn’t quite to managed by computer programs and the driver actually had to be paying attention to what the car was doing.