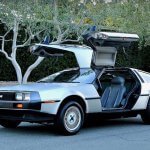 (Editor’s note: We first published this story in celebration of St. Patrick’s Day 2018 and reprint it now with a new footnote and video about a new Irish car company, AVA, that has Peter Brock updating his classic Corvette Stingray in the form of the Hyperclassic.)

While some people already are into their second (or third) glass of green beer in the run up to St. Patrick’s Day, others view the occasion as a time to reflect on Ireland and its history and heritage. When it comes to the Irish as automakers, even for the car-savvy it pretty much adds up to: Ireland + car = DeLorean.

Note: For our purposes, we’re considering Ireland as the entire island, and we’re approaching the border between the Republic and Northern Ireland as the two Koreas did at the recent (2018) Olympic Winter Games — we’re one for all and all for one.

But while DeLorean is the most prominent of the vehicles produced on the Irish island, it is not the only one. We’ll get to the others, which include the likes of the Shamrock and Silver Stream, but we’ll start with the stainless-steel, gull-winged cars built by John Z. DeLorean, but made famous by Hollywood.

John Zachary DeLorean was a rebellious sort — figuring out how to circumvent corporate policy, wedge a big V8 engine into a mundane, mid-size chassis and produce the first of the Detroit muscle cars, the GTO, when he was chief engineer at Pontiac. He did so well by Pontiac that he was put in charge of Chevrolet, and seemed destined to someday rule over all of General Motors.

But he unbound himself from the corporation. He let his hair grow longer, got plastic surgery, divorced and married a much younger woman, moved to California, divorced and remarried, and decided to get back into the car business by building his own sports car.

With a grant from the UK government, an assembly plant was constructed near Belfast and from 1978-82, more than 8,500 DeLorean DMC-12 sports cars were produced. But things were unraveling. DeLorean was arrested in Los Angeles and charged in a cocaine-distribution bust and later he was charged in Michigan regarding the disappearance of millions of dollars from the car-building operation; in both cases, after many years in court, he eventually was acquitted. He died in 2005 at the age of 80.

The DeLorean DMC-12 was a stunning vehicle. The stainless-steel body was designed by Giorgio Giugiaro, though the V6 engine mounted at the rear provided only 130 horsepower, making the car more show than go.

And that might have been the end of the story had the producers of a movie, Back to the Future, not turned one of the DMC-12s into a time machine. The movie was a box-office hit and a cult classic for an entire generation, and the DeLorean was as much a star as the time-traveling Michael J. Fox or the mad scientist Christopher Lloyd.

The Alesbury Brothers built only nine of their motorcars, the first of them unveiled at the 1907 Dublin Motor Show. They produced their four-seater cars at the Edenderry Works in County Offaly. The car bodies were made primarily from Irish-harvested wood. Tires were solid rubber. Power was provided by the 8/10hp two-cylinder Stevens Engine. Production ended in 1908.

Frank Costin was a mid-career engineer at de Havilland Aircraft when his brother, Mike, asked him for advice about a car body he was designing for a friend. The friend was Colin Chapman and the car Frank Costin ended up designing was the Lotus Mark VIII, Chapman’s first fully enclosed racing car.

Frank Costin’s skills became much in demand. He did a Grand Prix car for Tony Vandervell, and the car won the Grand Prix Constructors Championship. Costin also worked with Maserati and also would become the Cos in engine builder Cosworth and also the -cos in sports car manufacturer Marcos, with Jem Marsh.

Costin also produced, from 1970-72, a limited (9 cars) run of the Amigo, a fast and lightweight sports car.

From 1983-87, the Thompson Motor Company of Wexford, Ireland, founded by four brothers, produced the TMC Costin, a car designed to compete with the likes of the Lotus Seven. There were several versions of the car, which were powered by a 1.6-liter Ford engine.

TMC declared bankruptcy in 1987 and rights to the design were purchased by an American, Danny Panoz, whose father had a pharmaceutical company based in Ireland. Panoz took the design home to Atlanta and built the Ford V8-powered Panoz Roadster, and with his father established Panoz Auto Development to produce high-performance sports and racing cars.

Established in 1957, the Crosslé Car Company claims to be the longest-established racing-car constructor on the planet. The founder was John Crosslé, a motorcycle racing champion who started building four-wheel racers that soon were winning championships in Europe and the United States, in Formula Ford and in Formula 2.

By the late 1970s, the company was building more than 100 Formula Fords a year, more than 80 percent of them for the export market. Drivers such as Nigel Mansell, Eddie Irvine and John Watson were among those racing Crossles early in their careers. In 1991, the company added a “sports trials” racer for off-pavement competition and then fully fendered sports racers.

Engineer Davy Woods and motorcycle racer Artie Bell spent a reported eight years, starting in 1949, building the DAWB 6 in Belfast. Turned down by the likes of Bertone and Pinin Farina, they had the coupe body designed by Billy Leitch, a former apprentice to Woods at Belfast Tool & Gauge.

Producing such a car was deemed too expensive. At last report, the car was on display in a transportation museum in Ulster. There also are rumors that a second model, the DWBS, was produced and shown to British Prime Minister Margaret Thatcher in 1981 when she visited Belfast Tool and Gauge.

In 1959, Americans James Conway and William Curtis launched Shamrock Motors in Tralee, Kerry. The story goes that Curtis, then only 27 years old, was struck by the poverty of the area while visiting his wife’s family and with Conway constructed a 40,000-square-foot manufacturing facility.

Canadian racer Alvin “Spike’ Rhiando was hired to design the Shamrock, which reportedly looked so much like a Ford Thunderbird that it was nicknamed the “Irish T-Bird,” though some who say it said it was more of a parade float than a car what with its 17-foot length and “ridiculously long” overhands.

Their plan was to produce a large and luxurious car aimed at the American automotive market. They wanted to roll out 3,000 vehicles that first year and as many as 10,000 each of the ensuing two years.

Depending on the source you believe, they ended up building none, four or 10 cars, and some doubt they actually produced any, though there are reports of one actually arriving in the U.S.

Though large and luxurious, despite only a 98-inch wheelbase, power was to come from a 1.5-liter, 53-horsepower Austin A55 engine. The transmission and suspension also were to come from that smallish British car. The prototype vehicle reportedly had a four-door, fiberglass body with removable hard top.

After their dream ended, all unused parts from the project reportedly were dumped into a local lake.

In 1907. Philip Somerville-Large, a railroad engineer, decided that Ireland needed to produce a high-quality motorcar, so he created one — just one. The Silver Stream had a 3.0-liter, 6-cylinder Gnome engine, a chassis by Maliceet et Blin and bodywork by Salmons of Newport Pagnell, England.

The car reportedly was elegant and luxurious, but it would have cost some £2,000 to reproduce, and you could buy a Rolls-Royce for less than half that amount.

Perhaps most significant, a Thomond was featured on the 39-pence Irish postage stamp in 1989.

“Forget DeLorean,” reads the recent headline in The Irish Times, “Ireland could be an electric car-making hub.”

“Think of building cars in Ireland and one’s mind immediately goes back to Ford’s vast factory in Cork, which failed to survive the twin blows of recession and changes to Ireland’s car taxation laws,” the newspaper reports. “Or of John DeLorean’s hubristic dreams of building a futuristic sports car in Belfast (while simultaneously squeezing every possible penny out of the British exchequer).

“Crowley’s new AVA Automotive will be similar to neither of those.”

What Crowley is doing at the moment, with former Jaguar designer Ian Callum as a consultant and Peter Brock doing the design details, is getting ready to produce 10 examples of the Hyperclassic, a sports car inspired by the Corvette Stingray of the 1960s, but with a modern 1,200-horsepower electric powertrain beneath its flowing coachwork.

Crowley’s Irish-based Electrifi is in the business of doing electric powertrain conversions of existing classic vehicles, including the Ferrari 308 GTS and the Land Rover Defender.

“There’s a huge appetite to convert existing vehicles,” Crowley told the newspaper. “But you have to start at the higher end of the market. If you go to convert, say, a three-year-old Focus, then the economics don’t add up.

“If you start with classics, with cars that are worth more than, say, €100,000, then you can afford to convert it. Our conversions are sold out to 2023, so there’s clearly monster demand for it. We’ll slowly move into what you might call ‘regular’ vehicles, but it’ll take a while.”

The post Classic cars made in Ireland: DeLorean is only tip of Irish iceberg appeared first on ClassicCars.com Journal.