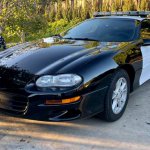 The Pick of the Day is a 2002 Chevrolet Camaro Police Interceptor-B4C package coupe being advertised by a private seller in Fallbrook, California.

“This car is a retired state trooper vehicle that was not in service that long,” the seller reports in that advertisement.

“The B4C was a Chevrolet Production code for the Police package which added numerous performance and handling features as well as better braking with slotted disc rotors and other upgrades,” the seller continues.

“The production numbers of these B4C cars were limited for the 2002 model year, making it one of the rarest options as well and this car is also the rare and highly sought after hard top, in fact an extra-potent ex-police car that was made to be quick enough to catch just about any speeder on the road in its day.”

The seller reports that the car was repainted less than six months ago and the doors were vinyl wrapped and the CHP logos were done with the same reflective material as used by California’s highway patrol.

The original pair of rear police antenna holes were plugged.

While the Motorola “wig wag” strobe light controller box remains securely in place in the trunk, the car’s strobe-effect police headlamps have been replaced with standard lights (though the strobe units are included in the sale).

“The car has the original untouched LS-1 engine and also has the original 4L60E automatic transmission which was just gone thorough and freshened up 1,000 miles ago by a professional shop,” the seller reports.

“This B4C Camaro has been professionally tuned at Tunes by Shane which is Shane Hines, who tunes most of the ‘Street Outlaw’ cars,” the seller continues. “Shane is amazing at tuning several cars and all his customers have lots of success at the track to prove it.”

The seller also reports other upgrades made in the recent years, including new steering equipment, upgraded fuel pump, larger transmission cooler and a Borla exhaust.

As for the Tunes by Shane tweaks, “Shane has put a very mild street/performance tune to this car and it’s an absolute blast to drive. After the tune the car went to the race track and ran a 12.52 at around 110 MPH. The car also won a small Street Stock category race at Gateway Raceway last year.”

“A sleek, stealth machine like this is rarely made available to the public,” the seller says. “There were only a few hundred Camaro police packages (B4C) made at all in 2002.”

The car is being offered for $21,900. To view this vehicle on ClassicCars.com, see Pick of the Day.

PS: We’ll suggest that the buyer of this or similar vehicles chats with his or her local police chief or sheriff to smooth the way for such a car to be driven from time to time, whether to and from shows or the drag strip or in holiday parades.

The post Pick of the Day: Police-package Camaro appeared first on ClassicCars.com Journal.