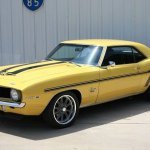 Live on AutoHunter, the premier online auction destination driven by ClassicCars.com, is this 1969 Chevrolet Camaro Yenko tribute that underwent a professional restoration within the past 15,000 miles.

When Chevrolet released the Camaro in 1967, GM prevented intermediates and compact-bodied cars from having an engine larger than 400cid – until Don Yenko stepped in.

Yenko, famous racecar driver and Chevy dealer, with the help of Dick Harrell, reengineered the Camaro with a 427cid V8 powerful enough to compete on the dragstrip. These Camaros were called the Yenko Super Camaros and were produced until 1969 when government regulations and rising insurance costs halted production.

The ’69 Yenko tribute Camaro up for auction on AutoHunter is powered by a 427cid V8 engine with 990 rectangular port heads and 4-bolt main block mated to a Richmond 5-speed long-shift manual transmission with original Hurst shifter.

To hear the engine run, watch the video below:

The interior is done in black upholstery with 3-point seat belts up front, a new console with replacement gauges and a wood grain steering wheel.

Visit this vehicle’s AutoHunter listing to find further information and gallery of photos.