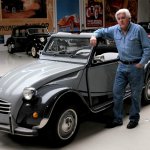 The Citroën 2CV (or Deux Chevaux) is France’s equivalent to the Ford Model T or Volkswagen Beetle—an iconic car built in massive numbers that helped mobilize an entire nation. Of the millions of 2CVs built between 1948 and 1990, this one stands out thanks to an aftermarket convertible, err, conversion. This episode of Jay Leno’s Garage has the full story on this unusual car.

Jay Leno’s Garage fans wanted a video on this car after seeing it in the background of other videos. This 2CV was modified by Wolfgang Hoffman with a fiberglass body that attached to the existing chassis, not unlike Meyers Manx dune buggy conversions. The idea was to make the 2CV a little fancier, Jay says. The 2CV was developed before World War II, but the war delayed the start of production until 1948. The car is largely credited with mobilizing rural France during that postwar period.

The bodywork may be different, but the Hoffman 2CV is mechanically stock, meaning it’s powered by an air-cooled 2-cylinder engine making as little as 26 hp. That tiny engine drives the front wheels. The 2CV also features long-travel suspension that, according to legend, was designed for driving through farmers’ fields.

Leno acquired this car from a United Nations ambassador, who had stored it in Southern California for about 20 years. While it didn’t require a full restoration, a lot of work still went into making this convertible roadworthy.

The 2CV was mechanically sound, with good paint and bodywork, but had also become a home for mice, Leno explains. It had to be fumigated and cleaned, which seemed to be a more difficult process than the minor mechanical work needed to get it running again.

Other iconic “people’s cars,” such as the VW Beetle, Fiat 500, and Mini Cooper, have gotten modern reinterpretations, but Citroën has said it won’t do a modern 2CV. The automaker is now part of the Stellantis conglomerate, but is unlikely to make a return to the U.S. anytime soon. Stellantis recently dropped plans to bring sibling brand Peugeot back to the U.S.

Check out the full video for the complete story on this car, and to see Jay drive it in the streets of Los Angeles.