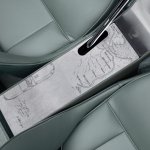 Jaguar Classic will celebrate the 60th anniversary of what Enzo Ferrari called the world’s most beautiful car design by producing six limited-edition matched sets inspired by the iconic E-types that debuted at the 1961 Geneva Motor Show.

Center consoles in the collection cars will feature engraved artwork by Johnny “King Nerd” Dowell celebrating epic road trips undertaking by Jaguar test driver Norman Dewis and company publicist Bob Berry, who drove the original pair — Dewis in the roadster, Berry in the coupe — from England to Geneva for the official unveiling.

Apparently, the roadster was a last-minute addition for the show stand and Dewis was told to “drop everything” to get the car to Geneva in time, thus the name of the green shade for the collection roadsters.

Meanwhile, Berry arrived only moments before the cars were to be unveiled, prompting Jaguar founder William Lyons, who was waiting at the show, to tell Berry, I thought you’d never get here.”

“Sixty years after its unveiling at the Geneva Motor Show in March 1961, the talented team at Jaguar Classic are releasing the ultimate birthday present to the E-type: the E-type 60 Collection,” Jaguar Classic director Dan Pink was quoted in Jaguar’s news release.

“The attention to detail demonstrates how this project has been a labor of love for our designers, engineers, craftspeople and partners. Exquisite detailing combined with enhanced usability ensure these E-type vehicles will be coveted and enjoyed for decades to come by their discerning owners, starting with a once-in-a-lifetime Coventry to Geneva pilgrimage for our six customers and their guests in Summer 2022.”

Jaguar noted in its announcement “The most significant mechanical upgrade is a specially developed, five-speed manual gearbox with synchromesh, helical cut gears, and a reinforced cast aluminum casing designed to deliver enhanced reliability and greater durability, as well as closer gear ratios and smoother gear changes.”

The 60 Edition cars get a light beech-rimmed steering wheel as fitted to 1961 vehicles, but with a 24-carat gold horn button. Each vehicle also gets a tailor-made E-type 60 car cover, tool roll and jack storage bags.