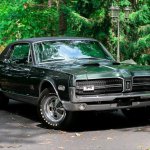 One of the most sought-after 1968 Mercury Cougar models is the XR7 GT-E edition with the 427cid (7.0-liter) V8 factory-rated at 390 horsepower, and the Super-Competition Handling package.

The Pick of the Day is a 1968 Mercury Cougar XR7 coupe finished in Augusta Green with “original numbers-matching correct W Code 427 4V and C-6 Select-Shift Merc-O-Matic transmission,” according to the North Liberty, Indiana, private seller advertising the muscle car on ClassicCars.com.

“In 1968, the only Ford product available with the 427 engine was the GT-E Mercury Cougar,” the seller says. “Only 256 W Code 427 GT-E Cougars were made, making it in a unique and highly sought-after variant of the Cougar.

“Of these 256 W Code GT-E’s, considering other original options of this car, there were 43 painted Augusta Green, 4 were equipped with front seat headrests and only one car with rear seat shoulder harnesses. This is that car!”

According to the seller, this authentic GT-E is “registered with the Cougar National Database and the Cougar GT-E registry,” documented with its window sticker and Deluxe Marti Report, and shows 76,351 miles on the odometer.

The asking price for this special-edition performance XR7 GT-E is $159,900.