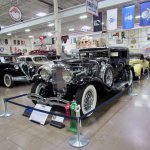 Seemingly every car museum in the country has its special feature, be it the Frank Lloyd Wright gas station inside the Buffalo Transportation Pierce-Arrow Museum in upstate New York, the historic red barns at the Gilmore Car Museum in western Michigan, or the red ribbon-wrapped exterior design of the Petersen Automotive Museum in Los Angeles.

But among the most special of such special features are the music machines that share the real estate at Stahl’s Auto Collection in Chesterfield, Michigan, just northeast of Detroit.

Ted Stahl has assembled a stunning car collection, but he also became fascinated by other mechanical machines, those that play music, and the cars are ringed by organs and other music machines, some massive and some of which play by themselves at the touch of a switch.

After being closed since March 17, 2020, because of the coronavirus pandemic, Stahl’s reopened March 11, 2021, albeit on a limited Thursday-only basis through the month of April, after which there are expectations of returning to regular admission hours. Tickets for the re-opening period are free, but donations toward the upkeep of the cars and music machines are welcome.

The Kansas City Automotive Museum in Olathe, Kansas, will host a car show April 10 at Meadowbrook Park, an 80-acre facility in Prairie Village, Kansas. The event will raise money for the museum and for the Johnson County parks and recreation foundation and its public art project.

“The park itself allows us to host this entertainment in a safe and outdoor setting,” Jan Huckleberry, the museum’s development director, told the Shawnee Mission Post said. “We are very aware and respectful of the fact that health and safety is the number one priority when planning an event of this nature. We are going to take all the necessary steps that are required to provide a healthy and safe environment for participants and visitors to the park.”

In addition to 100 collector cars, the “masks required” event will feature food trucks, a scavenger hunt and live music.

At the museum’s location, car shows are planned for Mother’s Day May 9) and Father’s Day (June 20) with an “Oddballs & Obscurities” show June 12. The annual “Great Car Show” for 2021 is scheduled for July 18 at the National WWI Museum and Memorial in Kanas City.

The AACA Museum in Hershey, Pennsylvania, has extended its Minibike Mania exhibit through April 23. The exhibit features more than two dozen examples of the mini-motorcycles that emerged in the 1940s and ‘50s and flourished in the ‘60s and ‘70s.

The exhibit also is featured in a “Cars of Carlisle” podcast.

The British Motor Museum at Gaydon has announced a partnership with King & McGay to make the museum’s extensive photographic archive available for purchase for use in homes or offices.

“Gianni Agnelli and Ferrari: The Elegance of the Legend” opens March 12 at the Museo Enzo Ferrari in Modena, Italy and runs until April 1. Featured in the exhibition, which celebrates the 100th anniversary of the birth of the Fiat chairman, are the one-off cars created for him.

Author and Barn Find series host Tom Cotter shares the story of his Cunningham, one of only four C3 models produced with a manual transmission, in an AACA Museum Live presentation via a Zoom webcast at 10 a.m. on March 27.

Autobooks-Aerobooks in Burbank, California, features Dave Wolin and his IMSA RS and Showroom Stock racing books from 10 a.m. until 2 p.m. on March 27.

The Kansas City Automotive Museum in Olathe, Kansas, resumes its cars and coffee events on the first and third Saturdays of the month starting April 3 at 8 a.m.

Beginning in May and running into September, the LeMay Family Collection in Tacoma, Washington, hosts a second Thursday “Cars and Comedy” evening starting at 6 p.m. The museum says to bring a picnic and enjoy an evening featuring local comedians.

Michael Schumacher and Paul Page will be inducted into the Indianapolis Motor Speedway Hall of Fame on May 27.

The AACA Museum in Hershey, Pennsylvania, will host a “Sizzlin’ Summer Cruise In” from 8 a.m .until 2 p.m. on June 19.

The post Stahl’s reopens its collection of machines automotive and musical appeared first on ClassicCars.com Journal.