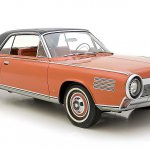 One of the few things I remember from when my mom took my brother and me to the 1964 New York World’s Fair was the sight and sound of the Turbine Car rounding the track at the Chrysler pavilion.  So yes, I was a car geek even back then.

And yes, back in the post-war Jet Age there were expectations that shrieking jet turbines would replace comparatively clunky piston engines in everyday cars and trucks.  Chrysler spent millions during the ’50s and early ’60s developing the technology for automobiles to run on turbine power, even building 50 of them for real-world driving and lent to regular people for three-month evaluations.

Eventually came the recognition that turbine cars were going nowhere, for various real-world reasons, and the sleek turbine coupes were returned to Chrysler when it shelved the project.  In all, 55 were built – five prototypes and the 50 production cars – and 45 of them were sent to the crusher and destroyed.

Which was a sin and a shame, I’d say, and it kind of reminds me of when GM destroyed all but a handful of its landmark EV-1 electric cars.

The Pick of the Day is one of the surviving 1963 Chrysler Turbine cars, and one of only two in private hands, the other being in Jay Leno’s collection.  There are other survivors housed in museums, such as The Smithsonian Institution, The Henry Ford and The Petersen Automotive Museum, but other than Leno’s, this is the only one privately owned.

“Chassis number 991231 is the crown jewel of the (Frank) Kleptz Collection, with the distinction of being the only Chrysler Turbine Car available on the open market today,” according to the St. Louis, Missouria, dealer advertising the car on ClassicCars.com.

“As offered, it is in exceptionally well-preserved condition, finished in its original metallic bronze paintwork with complementing upholstery, all original fittings and fixtures, and a host of spares, documents and technical information.”

The Turbine is also in running condition thanks to the concerted efforts of the late Kleptz, who was a renowned car collector and historian from Terra Haute, Indiana.

Number 991231 spent its working life on the West Coast as a demonstrator before being presented to the famed William Harrah Collection of Reno, Nevada, along with a spare turbine engine, the dealer notes in the lengthy ad description.  Kleptz obtained the car in the late 1980s following the breakup of Harrah’s collection after his passing.

If any car deserves to be called iconic, it’s the Chrysler Turbine, which aside from its obvious technical advances is also a uniquely handsome automobile.

“Styling was done in-house, overseen by the new design chief, Elwood Engel,” the dealer explains. “Engel replaced (Virgil) Exner in 1961 and introduced a more-sophisticated, slab-sided design language, which he honed while working at Ford – which explains the Turbine’s passing resemblance to a late ’50s Ford Thunderbird.

“The Jet Age motifs were more subdued than the wild fins and chrome of the Exner era, and the Turbine Car was understated yet distinctly elegant.”

The car comes with “a vast file of engineering drawings, technical information and historical documentation,” the seller says. The sale also will include a spare turbine engine and transmission assembly.

There is no price tag presented for this significant piece of automotive history, and who knows its value since there obviously are no comps.  Contact the dealer for the asking price, and a lowball offer is not recommended.

And speaking of spare engines, the dealer offering the car apparently also has a turbine engine and transmission being sold separately, a display piece mounted on a rolling stand, which would be the ultimate piece of garage art.

“Unit number GT-135 is a sealed turbine unit and transmission assembly, that is believed to be a spare from the Turbine Car public test program of 1963-1964,” the seller says.

To view this vehicle on ClassicCars.com, see Pick of the Day. For the engine and stand, see turbine display piece.

The post Pick of the Day: 1963 Chrysler Turbine car, a historic relic of the Jet Age appeared first on ClassicCars.com Journal.