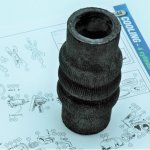 Owners of Triumph sports cars from the 1950s and ‘60s have long confronted a simple but critical problem in keeping their cars on the road – finding good-quality and correct-looking upper radiator hoses.

With that in mind, British Motor Heritage has introduced a “top-quality replacement” for the radiator hoses for TR2 through TR4A models that look like original equipment but outperform the old design.

“Visually and dimensionally correct but of higher quality than the original, the remanufactured item comprises a stockinette covering over a modern reinforced EPDM polymer hose,” according to a news release from BHM, a company that specializes in reproducing parts and providing services for British classic cars.

“Much effort was expended on the finish of the product, which required the resurrection of bygone techniques,” the release note. “The dimensions were taken directly from a period Triumph drawing and rare original hoses acquired for reference.

“Last but not least, a selection of pre-production samples were subjected to several months of testing by willing TR owners, during which thousands of trouble-free miles were accumulated.”

The Triumph hose, Part No. GRH453, represents a new effort by BMH to recreate key products for the collector and hobbyist market, and the first directed at the early Triumph models.  The British company is best known for its reproduction of body panels and entire body shells for popular sports cars from the UK.

“This is the first of a number of new products we will be launching for the benefit of our core market over the coming months,” BMH managing director Graham Payne said in the release. “We are also in the process of investing significant sums in the refurbishment of our original BMC/Leyland tooling, some of which is now c.60 years old.”

BMH parts are available from dealers worldwide. Visit the BMH directory for a list of dealers, including those in the US.