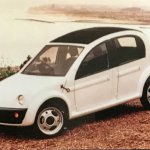 Before he was an engineering executive with Renault, American Motors and Chrysler, Francois Castaing was growing up in post-war France, where “I saw how small, affordable cars created not just physical mobility but also social and economic mobility.”

So, while overseeing the creation of vehicles such as the Dodge Viper, revitalized Ram pickup truck and a succession of Jeeps, Castaing shepherded another project, the so-called China Car. Known within Chrysler as the CCV, or Composite Concept Vehicle, Castaing’s vision was an easy-to-assemble but dependable first vehicle for the 75 percent of the world’s families without any mechanically powered 4-wheeled transportation device.

The previously untold story of the development of the China Car and of its display at the Museum of Modern Art, but also of its demise, is told by Castaing in a book that bears the car’s name, a book published in 2019 but only recently receiving promotional attention.

At only 104 pages, the book is an easy but revealing read as it pulls back the curtain on how automakers invest time and expertise and millions pf dollars in projects that may or may not progress beyond a couple of prototypes, albeit very expensive prototypes.

By the way, the first of those prototypes were dubbed Hippo I and Hippo II.

Castaing’s dream was a car that could be for China, India and other countries what the Citroen 2CV was for post-war France. Versatile, inexpensive, sheltered transportation.

It would carry as many as 5 people at speeds up to 70 mph. The body was made from four large injection-molded components comprised of 3,200 recycled half-gallon soda bottles. The roof was canvas that could be slid open to the rear bumper, enhancing cargo capacity. Power came from a 2-stroke V-twin engine capable of around 50 mpg.

Production would be done in developing countries and pricing would be the equivalent of $2,000.

An example was unveiled at the Frankfurt Motor Show in 1997 and a few months later at the North American International show in Detroit, and soon thereafter at the MoMA.

And that’s as far as the CCV would go. Castaing’s book tells the tale.

The China Car: How motivated Chrysler engineers with their suppliers/partners created an affordable automobile for the world’s porr using recycled plastic — and why the project was killed.

The post Bookshelf: A tell-all about development of a car you never saw appeared first on ClassicCars.com Journal.