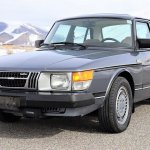 Saabs often instill cult-like devotion, their owners as passionate about the quirky Swedish cars as those who drive around in Ferraris, Porsches and Jaguars. Saab fanatics have events and shows, and they drive and enjoy the things that make their cars so different.

For the Saab 900, there are just so many things that make it stand apart, such as the individualistic styling, an aircraft-like curved windshield, the backwards-mounted 4-cylinder engine with its belts and pullies against the firewall, and the ignition switch located on the floor between the seats.

I am married to a member of the Saab cult. My wife currently owns two Saabs and is a member in good standing of the Saab club. She dreams of someday going to Saabs at Carlisle during the Import and Performance Nationals.

This Saab 900 Turbo seems to be one of the few remaining with exceptionally low mileage, in this case, 51,268 miles from new, according to the Hailey, Idaho, dealer advertising the car on ClassicCars.com. The sedan has been Sun Valley, Idaho, since the mid-1990s and shows absolutely no rust, the dealer adds.

The original tan cloth interior appears to be in great shape, aside from some dash cracks, which is common for these cars. The seats look very good; the material used for Saab 900 cloth interiors is among the most comfortable in the world and looks correct for the 1980s era.

During the past year, the Saab has received new tires, new muffler, new fuel accumulator, a power window switch, new wiper motor and wiper rail assembly. Is equipped with an Alpine stereo, a period-correct upgrade to this 900.

This Saab is favorably equipped with a 5-speed manual transmission, making it a fun sports sedan to take on a twisty mountain road. While not a speed demon, the 900 Turbo offered good performance for the era, with a 0-60 time of 9.9 seconds and a 17 second quarter-mile time.

The cockpit of a classic Saab 900 is a nice place to be, with comfortable and supportive seats and controls exactly where you expect them to be. An interesting feature is that each knob and button for the controls has its own design, something learned from the company’s aviation heritage – Saab’s tagline for many years was Born from Jets.

Finding one of these Saabs in this kind of preserved condition with such low mileage is harder that finding a nice original Porsche 911 Carrera RS. All seem to have been driven hundreds of thousands of miles and have rust or poorly executed rust repairs. This car is not perfect, but a very nice original example.

The asking price of $8,500 represents a lot of car for the money. It would be a great car for Saabs at Carlisle, RadWood, the Future Collector Car Show, and many other events.

The post Pick of the Day: 1982 Saab 900 Turbo, a quirky craft in preserved condition appeared first on ClassicCars.com Journal.