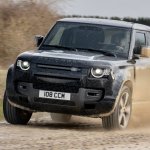 A panel of 50 women who work as motoring journalists in 38 nations on 5 continents have selected the Land Rover Defender as the Women’s World Car of the Year for 2021; it was announced March 8 as part of the International Women’s Day and Women’s History Month.

“The Women’s World Car of the Year is the only jury in the world made up entirely of women motoring journalists,” executive president Marta Garcia is quoted in the announcement. “This gives it enormous value because its decisions represent the liking and preferences of millions of women drivers around the globe.

“But cars have no gender,” she continued, “and are not subject to stereotypes so the winners of these awards are, quite simply, the best cars in the world.”

The voting was done in three stages and focused on vehicles launched during 2020. Aspects such as safety, performance, comfort, technology and value for money were considered, according to the news release.

The 9 finalists and their categories including the winning Defender, were:

For more information, including a list of those voting, see the Women’s World Car of the Year website.