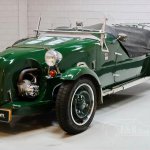 I have to admit that when I stumbled across the Pick of the Day on the ClassicCars.com marketplace, I thought the car had something to do with a beloved Dr. Seuss character concerned about the environment.

But that was the Lorax and the Pick of the Day is a Lomax, specifically a 1984 Citroen Lomax 224 with looks odd enough to have been drawn from Dr. Seuss’s imagination. The car is being advertised on the ClassicCars.com website by a dealership in Waalwijk, Netherlands, which notes that American customers can schedule delivery at the dealer’s warehouse in Linden, New Jersey, or at home through the New Jersey-based staff.

“This beautiful 1984 Citroen Lomax 224 has the 602 cc 2-cylinder engine with manual gearbox,” the dealership notes.

“The technology comes from a Citroen 2CV and is combined with a green polyester boat-tail body. The interior has a beautiful black upholstery.

“The car has as extra options a wooden steering wheel, luggage rack and many beautiful chrome parts.

“This Lomax was manufactured by the Lomax Motor Company in Stourbridge, England.”

At this point. we reached for Volume 2 — G to O — of the Beaulieu Encyclopedia of the Automobile to learn that the Lomax Motor Co. was founded in 1983 and that “fiberglass specialist Nigel Whall created one of the most ingenious and best-selling kit cars of all time with the 2CV-based Lomax.

“It was brilliantly simple: on top of an unmodified Citroen 2CV/Dyane floorpan (or Lomax’s own steel tube chassis) sat a very simple double-scuttle open body in a Morganesque style. The engine sat semi-exposed at the front,” which explains the car’s unusual appearance.

The Encyclopedia notes that several models of the 2CV-based Lomax were produced, including the 223, an even more Morgan-like 3-wheeler.

This 224 4-wheeler is green with a black vinyl interior. It’s front-wheel drive through a manual transmission.

The asking price is $18,001, but the dealer notes that the price does not include a 3 percent import duty.

The post Pick of the Day: Not a Lorax but a Lomax appeared first on ClassicCars.com Journal.