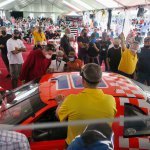 The McCormick family celebrated 35 years in the collector car automotive auction business in the US recently, reporting a 72 percent sell-through for its 70th live Palm Springs sale in late February.

“While the number of consigned vehicles was down from their usual pre-covid numbers of over 500 vehicles the event was extremely successful with total sales surpassing the previous November auction,” the company said in its post-auction news release.

“There’s a shortage of high-quality classic cars on the market and those that are available sell for strong money due to supply and demand.”

The auction offered 322 vehicles to bidders, and 230 of them were sold, McCormick’s said.

Keith McCormick and his newlywed wife, Delsey, began restoring and selling cars in England and eventually owned five dealerships, which they sold in 1981 and moved to Palm Springs, California, in what they thought would be an early retirement.

But the cost of living in California quickly consumed their savings, so the family returned to the vintage car business, staging two collector car auctions a year. The company now is led by the McCormick’s son, Jason.

McCormick’s next sale is scheduled for November 19-21 at the Palm Springs Convention Center.