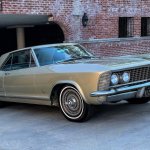 The Pick of the Day is a 1963 Buick Riviera that “will instantaneously transport you back to the classic, original, perfection that was the groundbreaking design, form and engineering of the 1963 Riviera,” according to the Marina Del Rey, California, private seller advertising the car on ClassiCars.com.

“Riviera is a state of mind, inspired by the winding glamour and effortless cruising of the European, captured here in an iconically American fashion,” the seller continues.

The odometer shows only 40,790 miles, which according to the seller, are original to the car.

“It has lived its entire life within a 40-mile stretch of the California Riviera from San Pedro to Marina Del Rey,” the seller states.

The restoration consisted of an engine rebuild, including carburetor and electrical, a transmission rebuilt with an original GM kit, replaced shocks, tires, hoses and suspension, and a dual-hydraulic-system upgrade for the brakes, the ad states.

Finished in its original Bronze Mist paint over a white leather interior, this vehicle is a “spectacular example and a true expression of the original Riviera,” the seller says.