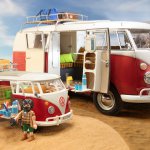 Were it advertised on the ClassicCars.com Marketplace, it would be the deal of the year: A Volkswagen T1 camper for less than $65.

Except this VW camper van is designed for child’s play because it’s the new 1:18 scale version from Playmobil.

“Despite the small size, it features great attention to detail, as a real exemplar was available,” Playmobil notes its announcement, adding that the toy is based on “Henrik the Red,” a 1962 T1 camper “from the collection of Volkswagen Commercial Vehicles Oldtimers,”  in Hannover, Germany.

“The bench seat tips up, and the table and cupboards work,” Playmobil continues. “They are even filled with appropriate food and camping utensils.

“Under the bonnet too the engine is easily recognizable — a classic 4-cylinder boxer, of course.”

While the T1 was a full-size and drivable vehicle, the Playmobil version is nearly 10 inches long, more than 4 inches wide and, with its roof rack, more than 5 inches in height.

The Playmobil version is available from Amazon. Playmobil adds that tourists can rent the full-size and vintage version through the German-language VW Commercial Vehicle Oldtimers website.

The post VW camper for less than $65? Yes, but it’s a 1:18 scale version appeared first on ClassicCars.com Journal.