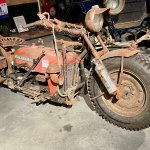 “Roll Your Own” is the title of the 21st annual vintage motorcycle exhibit that runs through May 22 at the National Packard Museum in Warren, Ohio. The exhibit features 30 motorcycles and is presented as a salute to the men and women who restored and preserved them.

“Some of the bikes in the exhibit were restored by their owners to pristine, original condition while others started out as pieces and parts before being transformed into unique, one-of -a kind machines,” the museum said in its news release.

Unique creations showcased include a 1971 BSA A65 Lightning Bobber by Robert Bancroft and a 1974½ Penton 400 Mint Custom Tractor restored by Peter “PJ” Grakauskas.

Although the museum focuses on the Packard auto company founded by two local brothers, “The purpose of the National Packard Museum’s Annual Vintage Motorcycle Exhibit is to educate our visitors about the important and unique role motorcycles have played within the broader story of transportation history,” according to Mary Ann Porinchak, the museum’s executive director.

“Our annual exhibit also promotes the preservation, restoration and collection of antique and vintage motorcycles, so that audiences young and old may have the opportunity to learn about and appreciate motorcycle history’s unique story.”

Pedal pushers at the Mercedes museum

In addition to the vehicles on display at the Mercedes-Benz Museum in Germany, the facility offers what it calls “33 Extras,” auxiliary exhibits focused on various aspects of the automobile. One such “extra” examines pedals.

“Driving a car requires coordinated actions,” the museum notes. “The most important of those are accelerating, steering, indicating the turning direction, braking, shifting and operating the clutch – and, of course, observing traffic while doing so. Early inventors quickly agreed that, in addition to the hands, the feet would also be used to operate the automotive mobility machine. Vehicles were given pedals.

“At the start, however, there was no consensus on where the driver was supposed to step. Each vehicle manufacturer had a different arrangement of the accelerator, brake and clutch. The Prussian military clarified the situation. In 1908, the pedal arrangement was standardized in army vehicles so that drivers could easily handle cars of different makes. This is how the arrangement of the accelerator, brake and clutch (from right to left), which is still used to this day, emerged in German Imperial army trucks. It did not immediately catch on everywhere, however. Up into the 1920s, the number and arrangement of pedals in cars was anything but uniform. The accelerator was often located in the middle. This was also the case in racing cars. Little by little, however, the current standard won out.”

The Derby City Council in England has been asked to approve Great Northern Classics plan to transform a former Rolls-Royce factory into a classic car and bike workshop and museum. The facility currently houses the Rolls-Royce heritage center, which is moving to the automaker’s main campus.

The former foundry would be used as a training facility for apprentices in engine building, fabricating, upholstering, etc., as well as providing a museum-style vintage vehicle storage facility open to visitors.

Racer Michael Schumacher and broadcaster Paul Page have been elected to the Indianapolis Motor Speedway Hall of Fame. Induction ceremonies are planned for May 27.

Schumacher won five of the eight U.S. Grand Prix races staged at the Speedway. Page was chief announcer for the Speedway radio network for 13 years and also covered motorsports events for ABC, NBC and ESPN.

The 2021 season opens March 5 at the National Corvette Museum’s Motorsports Park in Bowling Green, Kentucky, with a driving club day. The Kartplex opens the following day, and a King of the Heap event also is scheduled for March 6.

“Princesses & Carriages” is the theme of a special children’s event scheduled for 11:30 a.m. until 2:30 p.m. (Eastern) on March 6 at the Gilmore Car Museum in Hickory Corners, Michigan. The day will feature photo opportunities with 14 storybook princesses and princes beside royal coaches, limousines and fairytale backdrops, as well as a red-carpet experience, scavenger hunt, tea and treats and more. For ticket information, visit the museum’s website.

Beginning in May and running into September, the LeMay Family Collection in Tacoma, Washington, hosts a second Thursday “Cars and Comedy” evening starting at 6 p.m. The museum says to bring a picnic and enjoy an evening featuring local comedians.