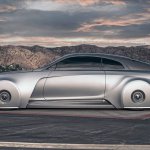 Take a look at these customized Rolls-Royces that have me daydreaming and playing with the Rolls-Royce configure widget building my very own custom Phantom.

In 2016, Rolls-Royce showed the world its 103EX concept car – Rolls’ vision for its first autonomous electric vehicle. The car went on a worldwide tour and caught the eyes of many, including pop star Justin Bieber.

The 103EX isn’t drivable and is most definitely not for sale, so Bieber reached out to West Coast Customs to see if it could customize a Rolls-Royce Wraith to match the futuristic concept.

West Coast Customs took on the challenge and documented on its YouTube channel the 3-year process, which included molding body panels to look like the 103EX concept.

The most notable changes to the Wraith are the wheel-covering panels that make the car appear to be floating. It also was given a new front end, re-sculpted fenders, and interior upgrades to match the exterior.

In the video, when West Coast Customs reveals the Wraith, Bieber drops to his knees in awe and tears up.

The first Rolls to incorporate Koa wood is this bespoke phantom commissioned by Jack Boyd Smith Jr. in Elkhart, Indiana.

Inspiration came from Smith and his wife Laura’s love for Maui, Hawaii and the beautiful Koa wood found on the island. Smith told Rolls the admiration for Koa wood is rooted deep in his family as a Koa wood rocking chair is a centerpiece of their home.

Koa wood is not easy to source. The Koa tree is protected in Hawaiian state and national parks, and the wood can only be harvested from private land and grown under very specific conditions.

After a three-year hunt, a Rolls-Royce wood specialist was able to negotiate with a Koa wood supplier to purchase an exceptional log from a personal collection – only the best for a Rolls-Royce.

Looking through the pictures, I’d say it was worth the wait.

Smith’s Rolls also comes equipped with a handful of other special features:

This new collection of just 20 Phantom limousines was inspired by time and space, says Rolls-Royce.

“As we all know, time never stands still, waits for no one. Hence, we manage it, guard it, account for it, weigh and measure it to its smallest fraction,” said Torsten Müller-Ötvös, chief executive of Rolls-Royce Motor Cars.

“With Phantom Tempus, we have created a space in which those strictures no longer apply – as illustrated by the deliberate absence of a clock.”

This galaxy-themed limo’s starlight headliner depicts the rare astronomical phenomenon, the pulsar. Found in the darkest corners of space in 1967, the pulsar is made up of dense, white-hot stars emitting electromagnetic radiation in regular pulses – one of the universe’s most accurate clocks.

The vehicle is absent of a clock and is decorated with a single billet of aluminum milled to create 100 contoured columns to represent the 100-million-years it takes for a pulsar star to fully rotate.

The Phantom’s exterior is finished in a new bespoke paint, Kairos Blue. The paint has mica flakes that, when it catches the light, look like stars.

All 20 models already have been reserved.

The post Custom-made Rolls will transport you to another reality appeared first on ClassicCars.com Journal.