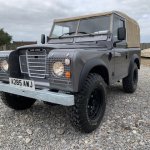 The British have a special affection for vintage Land Rovers, especially Land Rover Lightweights in Stornoway Grey with soft tops and seating for 6 occupants it seems.

At least that’s what John Brown 4×4 Ltd., a vintage Land Rover specialist in North Yorkshire, reports based on details from more than 100 vintage vehicles it has sold in recent years.

“We’ve found that interest in grey cars has far exceeded other colors,” the dealership’s marketing manager Greg Hendry is quoted in the news release. “Stornoway Grey, in particular, really complements the steely, utility look of Land Rovers while still appearing modern. We’ve seen this popular color resprayed on vintage models as well as modern Land Rovers, and it certainly complements both.”

“The engine is relatively easy to maintain, unlike newer engines with electronic systems, and often runs smoothly while exceeding 250,000 miles,” the dealership reports, adding:

“While the succeeding 300TDI is slightly quieter and smoother, fuel efficiency is actually worse — despite the introduction of the 300TDI to meet European diesel emissions regulations.”

“Truck-cab” versions, those with a hard roof over the front section of the vehicle but with a soft top at the rear, sell nearly twice as quickly other versions, the dealership reports. One reason cited is the versatility of such vehicles, the front cabin providing shelter in cold weather but with the rear canvas removed, SUV can be used a pickup truck when needed.

The most popular model, however, is the Land Rover Lightweight.

“It was designed for military use, having been stripped of heavier parts and bodywork so that it’d fit in planes and could be carried by helicopters,” John Brown 4×4 notes. “However, with a second tank under the passenger seat and larger batteries, the Lightweight became heavier in fully built-up mode than a standard Series model. But its ease of parts removal meant it was ultimately lighter for aircraft drops.”

“We often find that Lightweight models are some of the best cared for as they’re ex-military, so rack up very few miles on army bases while seeing regular maintenance,” Hendry noted.

“These military models are special, as they come with a variety of modifications for certain military uses — these variations can highlight a colorful past. Yet they share most parts with civilian Series 2 and Series 3 models, so spares are fairly easy to find.

“You can’t really go wrong with any of the specifications. However, it’s definitely worth considering the history of the car (if you’re buying vintage/used) and what you’re using it for when choosing different specs.”

In summary, John Brown 4×4 says what buyers want are vintage truck-cab Land Rovers — those 40 years or age and older are exempt from MOT testing — in various shades of grey, with wheels painted in a color called Limestone, and with galvanized chassis, the vintage diesel engine, seating for 6, and with free-wheeling hubs.