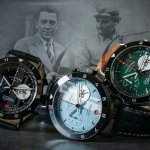 You have to admit, the tag lines for the S.O.E. Roadster are intriguing: “A moment in time worth celebrating” and “Racing, spies, bad guys and glory.”

The S.O.E. Roadster isn’t a car. It’s a watch, actually a new series of timepieces from the Trafford Watch Co. of Austin, Texas, which this week launched sales through the Kickstarter website.

Grover-Williams won the inaugural Monaco Grand Prix in 1929 and recruited Wimille and Benoist to join him in the S.O.E. He was captured, spent two years in a prison camp and reportedly was executed three weeks before the war ended.

Wimille was a two-time winner of the 24 Hours of Le Mans. After the war he returned to racing until he died in a crash in Argentina in 1949. Benoist was a fighter pilot during World War I, won at Le Mans in 1937. He had several harrowing escapes from the Nazis before being caught in 1944. He was executed three months later.

‘For William Grover-Williams, Robert Benoist and Jean-Pierre Wimille, it was an easy decision to make,” Trafford Watch says on its Kickstarter page. “On the race track these men were rivals, living life on the edge in small, metal death machines where one wrong turn could be devastating. But when the war effort called, they were bound by a secret connection that would forever change the course of the world.

“Their stories are filled with daring escapes, cunning sabotage and quick wits, making them heroes in the most real sense of the word. Join us as we celebrate this moment in time through the medium of watch making.”

The Kickstarter program starts at $250 and includes the watch of your choice, and a book about the racers turned secret agents, with deliveries starting in August.

As for the watches, the design was inspired by the Bugatti Type 35, Trafford Watch reports, and are available in the racing colors of the three drivers. The case back salutes the S.O.E.