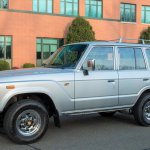 The Pick of the Day is a 1987 60-series Land Cruiser imported from Canada that is “turn-key and ready for the roads (or trails) ahead,” says the Stratford, Connecticut dealer advertising the SUV on ClassicCars.com.

Toyota rolled out the more-modern and more-comfortable 60-series Cruiser in 1980. They grabbed the attention of adventurous families looking for a roomy 4×4 comfortable enough to bring the whole family on both on- and off-road adventures.

The 60-series were the first of the Cruisers to have fuel injection, power windows and automatic transmissions. Manual transmissions, as well as diesel engines, were options for the 60-series.

“Though popular in the United States, the Land Cruiser was a staple abroad,” the seller says. “Additional variations of the Land Cruiser were available in foreign markets, but few were as popular as the diesel-powered 60 and 62-series station wagons.”

The Canadian-spec truck up on ClassicCars.com is powered by a 4.0-liter inline-6 diesel engine that’s mated to an automatic transmission and two-speed transfer case.

According to the dealer, the silver metallic paint is in “excellent condition with paint meter readers between 2.8 and 3.8 mils.”

They also note that the striped grey cloth interior “remains in showroom condition.”

The Cruiser comes equipped with “an upgraded Old Man Emu suspension, a replacement windshield as well new wheels and tires” and is “free of any significant rust of rot.”