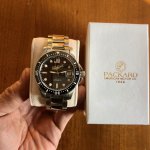 In 1899, James Ward Packard bought a Winton motor car, but found it lacking and, since both he and Alexander Winton resided in Cleveland, he was able to express his disappointment to the car’s maker.

As the story goes, after several interactions between the men, Winton responded, “if you’re so smart, maybe you can build a better machine yourself.”

So, with help from his brother, William Doud Packard, that’s just what happened. That same year, in November 1899, the first Packard motorcar was road tested. Winton sales peaked at 2,458, units and the company closed a few years later, in 1916. Meanwhile, Packard became known for producing among the world’s finest automobiles, luxury vehicles cherished during the Roaring ‘20s and beyond.

Did you notice the asterisk at the end of that previous sentence? It’s there because there are plans for a car company comeback, which is more likely than ever because of the new federal vehicle regulations that encourage such things, albeit on a limited-production basis.

That comeback is being kicked off, however, not with a car but with a watch, which in some ways is quite fitting.

Back a couple of centuries ago, the Packard brothers were inventors and manufacturers, primarily of electric products. James Ward Packard liked watches, collected them and even designed them.  According to the packardamerica.us website, “he frequently commissioned Swiss watchmakers to make his designs, including one of the most complicated pocket-watches ever made.”

That was the Vacheron Constantin Packard Grande Complication pocket watch, which in 2010 sold for $1.8 million at a Christie’s auction.

The new timepiece, of which 50 will be produced, is called the 1899 Model A. They are priced at $1,899 each, with 25 percent of that amount being donated to the National Packard Museum.

The American-produced wristwatches have a 40mm diameter dial featuring the Packard script. The watches are numbered, with the option for Packard owners to have the watch engraved with the serial number of the buyer’s car.

The post Packard plans a comeback, starting with a watch appeared first on ClassicCars.com Journal.