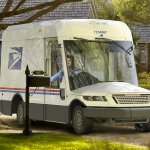 Talk about a classic, the last Grumman Long Life Vehicle was last produced in 1994, and yet thousands of them continue to be daily drivers…

Chances are that you may not recognize the name Grumman Long Life Vehicle, but you likely see one or more every day as the right-hand-drive vehicles traveling through your neighborhood or office park, delivering the mail.

Built by aircraft-producer Grumman from 1987-1994 and based on the underpinnings of the Chevy S-10 Blazer, including the “Iron Duke” 4-cylinder engine, the LLV was designed to be a long-serving mail-delivery unit.

A former postal worker writes that the LLV is “slow, ugly, unsafe and lacks any creature comforts at all. But despite its many flaws, it was kind of a fun thing to drive around.”

As you likely know by now, the Grumman LLV is going to be replaced — at last — by the Next Generation Delivery Vehicle, produced by Oshkosh Defense, part of the Wisconsin-based company that also produces tow trucks, firetrucks, military vehicles, television remote-broadcast trucks, concrete mixers, crane-equipped trucks, and — yes — garbage trucks, of which some people might say that so many wouldn’t be needed if all that junk mail wasn’t being delivered in the first place.

The Oshkosh-produced NGDV is part of what the U.S. Postal Service says is a soon-to-be-released 10-year plan designed to “transform USPS into the preferred delivery service provider for the American public.”

USPS says the new delivery vehicles were designed not only for carrying mail, but to be cleaner — many will be electric powered — and with the delivery driver in mind — the new vehicles will have air conditioning and heating. They also are taller, so delivery staff can stand up rather than stoop over in the cargo area, and they will be equipped with front and rear collision-avoidance technology, traction control and airbags.

At first glance, we thought the NGDV could be the basis for a cool conversion to a recreation vehicle for weekend camping trips.

With delivery starting in 2023, as many as 165,000 of the NGDVs are expected to be on the road within the next decade. The USPS reports that it has more than 230,000 vehicles in operation, including 190,000 doing daily mail deliveries.