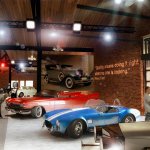 A new car museum located at the “crossroads of America” has announced plans to open in late July in Salina, Kansas.

The Salina Education Automotive Museum of America will be “an upstart” automotive museum located in a refurbished brick warehouse that will provide more than 43,000 square feet for exhibits, including a dedicated wing for the Kustom Kemps of America organization which annually draws around 2,000 vehicles to Salina for its “Leadsled Spectacular.”

The museum is part of a $160 million downtown redevelopment program that includes a 5-story hotel, residential lofts, multi-sport fieldhouse, riverwalk, restaurants and shops.

One museum theme will be Old Route 40, celebrating the cross-country route — Atlantic City to San Francisco — known as the “Main Street of America.” The route runs through four state capitals — Colorado, Kansas, Indiana and Ohio — as well as the former capitals of Illinois and West Virginia.

Someday, the Harvard Business School or some PhD candidate in crisis public relations will do a study on the way the National Corvette Museum turned a seeming catastrophe into triumph.

The catastrophe, of course, was the sinkhole that opened beneath the museum’s Skydome, swallowing eight cars that were on display; fortunately, the event occurred early in the morning so no one was injured. The triumph was the museum’s response to immediately share details — including security-camera video — and to continue the flow of information throughout the recovery of the cars, the repairs to the building and even tutorials about the fragile karst topography beneath the museum and much of the Bowling Green, Kentucky, area.

The results of being open about what happened and how the museum responded were surges not only in attendance but in donations.

Much of the credit goes to Katie (Frassinelli) Ellison, the museum’s director of marketing and communications. She joined the museum staff in July 2009 but left last week for a non-automotive PR position.

Ellison is a graduate of the local Western Kentucky University and was marketing director for the Bowling Green convention and visitor bureau, and publisher of the Bowling Green Parent magazine, before joining the museum staff.

But while she’s gone from the museum, she’s not quite leaving. Not only has she become a Corvette owner but a lifetime member of the museum.  Nonetheless, I’m sure the museum team will miss her, and I know those of us in the automotive media certainly will.

“Driving after Sundown, the Evolution of Headlights” is an interactive exhibit being planned for the AACA Museum in Hershey, Pennsylvania. But to make it work, the museum seeks vintage headlamps to include in the display.

“This ‘no-touch’ display allows guests to experience vehicle lighting effects merely by pointing at an array of different light types,” the museum reports. “The exhibit takes visitors from the days of candles, oil, and acetylene, to today’s modern lighting. A few special lights are needed to complete the exhibit, Examples are acetylene, ‘Woodlite,’ E&J projector. A complete list is here.

“If you have any of these lights that you would like to lend to the exhibit, we would love to hear from you.”

Hall of Fame induction moves back to Michigan

Though its building remains in Daytona Beach, Florida, the Motorsports Hall of Fame of America will induct its 2020 and 2021 classes back in Michigan, its original home. The ceremonies will kick off the inaugural American Speed Festival on September 27 and 29 at the M1 Concourse in Pontiac, Michigan, officials have announced.

“It’s great to have the new event center at M1 Concourse available to host our two ceremonies within three days, and even better to be able to do it at a facility where we can showcase historic cars on a racetrack right outside the building,” said Hall of Fame president George Levy. “It’s a great setting and a great way to kick off the American Speed Festival.”

The Revs Institute (Collier Collection) in Naples, Florida, re-opens this weekend to visitors.

The Petersen Automotive Museum in Los Angeles premieres its virtual Enzo Ferrari Cruise-In on its YouTube channel from 8 a.m. to 9 a.m. (Pacific) on February 28.

Five-time Brickyard 400 winner Jeff Gordon will be the featured guest from 6:30 p.m. to 7:30 p.m. (Eastern) on March 3 for the Indianapolis Motor Speedway Museum’s Zoom Cast. Jamie Little of Fox television will be the host. Registration is required and can be done through the museum’s website.

The 2021 season opens March 5 at the National Corvette Museum’s Motorsports Park in Bowling Green, Kentucky, with a driving club day. The Kartplex opens the following day, and a King of the Heap event also is scheduled for March 6.

“Princesses & Carriages” is the theme of a special children’s event scheduled for 11:30 a.m. until 2:30 p.m. (Eastern) on March 6 at the Gilmore Car Museum in Hickory Corners, Michigan. The day will feature photo opportunities with 14 storybook princesses and princes beside royal coaches, limousines and fairytale backdrops, as well as a red-carpet experience, scavenger hunt, tea and treats and more. For ticket information, visit the museum’s website.