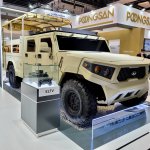 You might recall back in November 2020 when Kia unveiled prototypes for new 2.5- and 5-ton military vehicles. Well, the Korean automaker recently showed its Light Tactical Cargo Truck and Bare Chassis concepts at the IDEX defense exhibition in the UAE. The event is the largest such military showcase in the Middle East and Africa, Kia noted.

The vehicles are built on a modular platform — Kia’s Mohave sport utility chassis — optimized for military use, the company said, to serve as mobile workshops, communication hubs and troop and cargo carriers. The vehicles have 4-wheel drive, independent suspension and run-flat tires for usability in harsh environments.

Kia said it has supplied light-tactical vehicles to the South Korean army since 2016 and that its 4-seat Light Tactical Cargo Truck concept “adopts a bold, commanding design and has been equipped with a cargo container for transporting troops alongside diverse armory.”

The truck is powered by a 225-horsepower diesel engine linked to an 8-speed automatic transmission, and the truck features air conditioning and an electro-magnetic interference system.