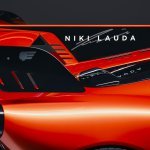 As if his T.50 supercar wasn’t enough, Gordon Murray Automotive has unveiled the T.50s Niki Lauda, which the company said “has been conceived, designed and engineered to offer the ultimate on-track driving experience.” The reveal took place on February 22, the birthday of the late three-time Formula One racing champion.

Murray Automotive plans to produce 25 of the Lauda-edition cars, which include “hundreds of components changed to optimize the car for track use.”

“The T.50 is the ultimate road-going supercar, but I always dreamed of taking it one step further,” Murray is quoted in the news release, “to build a version that will deliver an on-track driving experience like no other car in history.

“When we created the McLaren F1 GTR it was developed from the F1 road car. From its inception the T.50s Niki Lauda, though, was designed in parallel with the T.50. For the T.50 our target was clear, to make the best driver’s car for the road. With the T.50s Niki Lauda it was equally clear, to make it the best driver’s car for the track.

“Putting it another way, we asked ourselves what would be the coolest thing to drive on track and create a track driving experience like no other car in history?

“We had no interest in achieving the ultimate lap time or creating an over-tired and over-downforced spaceship at the expense of driver involvement, because ultimately you have to possess an F1 driver level of skill and fitness to get the best out of them.

“Instead, I laid out some parameters to create the ultimate driver’s car and experience on track: a central driving position, a V12 just behind your ear revving to over 12,000 rpm, producing over 700 horsepower and with an even faster response time than the T.50, downforce limited to 1,500 kg and a weight of under 900 kg. Plus the ability to turn up at any track, make a few basic checks and have fun, without the need for an entire support crew.

“In my view, it doesn’t get better than that and is driving in its purest form. The T.50s Niki Lauda will give a visceral connection between driver, car and track, the like of which has not been experienced to date.”

Lauda was part of the Brabham racing team when Murray was the team’s car designer.

The cars bearing Lauda’s name will be priced at £3.1 million ($4.4 million) each, with production to being January 2023.

“Owners will be able to individualize their T.50s Niki Lauda through their choice of colors and liveries, so that no two cars will be alike,” Gordon Murray Automotive added.