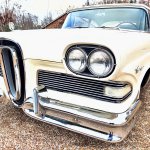 Edsels were not much appreciated when the short-lived Ford model was introduced back in the late 1950s. The unusual shape of the car’s grille reminded people of a horse collar. The cars, marketed to compete with Buck, Oldsmobile, DeSoto and the like, were loaded with features, and were expensive, especially in a recessionary economic era.

Decades later, however, the model has a perhaps small but faithful following. In fact, the Edsel Registry just recorded its 13,999th vehicle.

If you’re interested, two nicely restored Edsel Rangers are on the docket this week for the GAA Classic Cars Auction in Greensboro, North Carolina. One is a 1958 2-door and the other is a 1959 4-door.

“The 4-door Edsel is absolutely one of the best-restored 4-door Edsels that I have ever seen,” said consignor David Wilkey, who gives credit to the car’s owner back in the 1970s and ‘80s.

“Mr. Burn, they own a hosiery mill and it’s the one that got the women’s rights vote passed in Tennessee. He had the cars restored top to bottom,” said Wilkey, a long-time car collector (especially Shelby Mustangs) who owns a classic car restoration shop and appreciates good restoration work.

Wilkey attends the same church as Mr. Burn’s daughters. Their father died around 20 years ago and the daughters inherited the hosiery business and their father’s car collection. When they wanted to sell some cars, Wilkey was interested, and now is ready to sell a few, including the pair of Edsels.

He said the 4-door has been driven only 120 miles since its restoration. The car has a 223cid inline 6-cylinder engine and 3-speed manual transmission.

“It just a very nice car. The engine purrs like a kitten. It runs and shifts great. I think everything on that car works, including the clock and wipers. We went through the brakes and gas tank and carburetor.”

The 2-door is an E400 (361cid, 303 horsepower V8) with a Holly carburetor and pushbutton automatic transmission.

“We put a new Holly on it 8 or 9 years ago,” he said, adding that the car also has a new fuel tank and pump.

He said that car originally was equipped with power brakes, but that at some point it was switched to manual brakes. Yet the power brake equipment remains in the car and likely could be rebuilt for around $350, he noted.