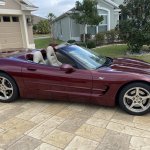 In 2003, Chevy released a special anniversary-edition Corvette to celebrate the sports car’s 50th birthday. What made this edition special from the rest was the Anniversary Edition Red paint, anniversary badges, Shale interior and cockpit embroidery.

On AutoHunter, the online auction platform driven by ClassicCars.com, you’ll find one of these 2003 Chevrolet Corvette 50th Anniversary Edition convertibles up for auction after being driven just under 29,000 miles.

The Anniversary Edition Red body features a tan soft top that is power-operated and has a glass rear window. The car has the signature C5 pop-up headlamps and factory fog lamps fitted in the front bumper. The 50th Anniversary badging can be seen on the hood, fenders and trunk lid.

The Corvette is equipped with active handling, a traction control system and a magnetic selective ride control that was part of the 50th Anniversary package.

All 50th Anniversary Corvette interiors were configured in a Shale color scheme with tan carpeting, Shale-colored bucket seats and a matching center console. The Bose stereo and speakers were factory equipped along with dual-zone automatic climate control, cruise control and intermittent wipers.

Powering the convertible is the original fuel-injected LS1 5.7-liter V8 factory rated at 350 horsepower. Power is sent to the rear wheels through a 4-speed automatic transmission and s limited-slip differential.

Visit this vehicle’s AutoHunter listing to find further information and gallery of photos.