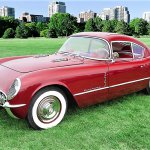 Long before Chevrolet rolled out its rear-engine Corvair compact car, there was another Corvair, a stunning GM Motorama concept car unveiled in 1954 that restyled the existing Corvette roadster into an aircraft-inspired fastback coupe.

This was from a time when General Motors was trotting its Parade of Progress caravan around the country, showing off what was foreseen as our automotive future. Most spectacular were the displays of myriad concepts and show cars that were rolled out from GM’s fertile design studio under the legendary Harley Earl.

Among them, the Chevrolet Corvair that debuted at the 1954 Motorama extravaganza in Manhattan. Its jet-fighter design was rendered in fiberglass, a celebrated new material used in the production Corvette. After its show days were done, the Corvair dropped out of sight, its fate unknown, possibly sent to the crusher.

The Pick of the Day is a custom-built re-creation of the 1954 Chevrolet Corvair fastback coupe, one of two made using (mostly) period-correct components, according to the Tampa, Florida, dealer advertising the car on ClassicCars.com.

“This Corvair was built over a three-year period by the current owner and his friend who also built the 2nd one for legendary collector Ken Lingenfelter when he offered them to buy it,” the seller says in the ad. “Every effort was taken to duplicate the legendary Motorama Corvair seen here.”

The eye-catching replica is completely drivable, the seller notes, although it is currently housed in an unidentified museum.

“This car was built from a 1954 Corvette and is titled as such with the original VIN number,” the seller notes. “The 2 front fenders are original to the car but all body panels were custom hand-made including all of the windows.

“It has a custom-built 265 cid V8 prototype motor for the 1955 Corvette with a 700R transmission hooked up to a 1956 Corvette rear end so you can drive this Corvair down the road if you wish to.”

Akin to such surviving ’50s Motorama relics as the Oldsmobile F-88 and Pontiac Bonneville concept cars, as well as the remaining Futurliner tour buses, this Corvair re-creation conjures up a magical time of automotive design when just about anything seemed possible.

The Motorama Corvair had been proposed for production when it debuted, but it became a what-might-have-been footnote when the company brass decided it was a too-risky proposition given the lackluster sales of the new Corvette roadsters.