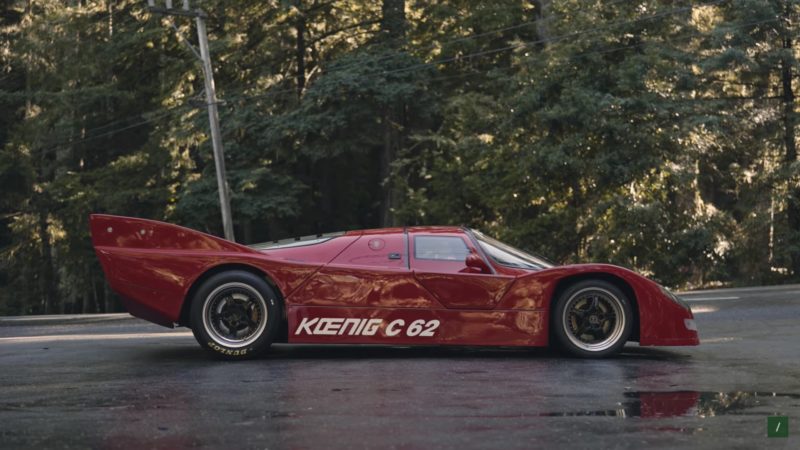 Race car for the road is a term that gets bandied about a bit too often these days. Often it’s a moniker applied to a hot hatchback or something else quite clearly developed expressly for road use. This wild Koenig, however, is a Porsche 962 that has been modified only slightly for street legality. It’s still a race car at heart, but now it has turn signals.

If you aren’t up to speed on the all-conquering Porsche 962 prototype that dominated the 1980s and early 1990s proceedings at Le Mans, Sebring, Daytona, and others, this video will give you the primer you need. The history of the car as a racer is intensely interesting, but not nearly as interesting as the Koenig. As the Group C category died off in the mid-1990s as the sanctioning body introduced new much-more-expensive engine regulations that pushed privateer teams out, there were literally hundreds of ex-racing cars sitting around collecting dust. Koenig purchased a handful of ex-racing 962s and built this mad machine.

While it may look exactly like the Le Mans prototypes you know and love, the Koenig has been massively revamped for road use. The bodywork is totally different from the racing car, including a raised front bumper and headlights to meet German regulations, revised aerodynamics to balance that raised bumper, and access panels for the front trunk and the engine. Speaking of the engine, it’s not the race-derived unit that powered Le Mans victories, it’s a street-911 Turbo-based unit. Even the suspension has been completely revamped with softer spring rates. So what was retained? Well, the chassis and the brakes package, and that’s pretty much the start and finish of it.

Anyway, I’ll let Issimi explain it to you in a little more depth. They’ve actually driven the thing, after all. I’ve only seen it. It sure is a thing of beauty, though.

The post The Koenig C62 Is Quite Literally A Race Car For The Road appeared first on FLATSIXES.