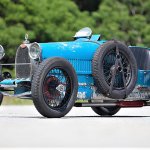 Gooding & Company’s annual Scottsdale, Arizona, auction was held entirely online this year due to the ongoing pandemic, with weeklong bidding on the company’s proprietary Geared Online website resulting in 40 of 49 lots of collector cars and automobilia items sold for a total of $7,092,031, the auction company reports.

The Geared Online Scottsdale Edition sale was led by a well-preserved, low-mileage 1966 Ferrari 275 GTB Long Nose coupe that went for $1.936 million (all reported results include auction fees), the only seven-figure result of the 25 cars that went to new owners.

An evocative 1954 Aston Martin DB2/4 drophead coupe (or convertible in US parlance) was the second-highest seller at $968,000.

Another auction sales record was set by a 1968 Meyers Manx dune buggy, which more than doubled its low pre-auction estimate by selling for $101,200.

One of the most-interesting lots in the online auction, a record-breaking 1972 Citroen SM Land Speed Racer on a custom fifth-wheel trailer towed by another Citroen SM custom converted into a pickup truck, was sold above estimate for $203,500.

Gooding sold 100 percent of its automobilia lots, led by a rare and totally cool 1963 Midway Race-Way pinball machine that went for $27,500, one of the highest auction results for a pinball machine. The electro-mechanical machine features a 3-dimensional display of two model race cars that move on an oval track as the score climbs.

The pre-pandemic 2020 Arizona Auction Week entailed a record eight auction companies holding collector car sales, including Gooding, but this year the January auctions were curtailed because of coronavirus concerns. Two of the auction companies held restricted live/online auctions in Scottsdale, with the rest canceled, postponed or held entirely online.

While Gooding hit more than $36 million in sales during its live Scottsdale 2020 auction a year ago, the scaled-back 2021 online replacement was seen as a positive result by the company’s namesake president and founder, David Gooding.

“We are pleased with the results of our Geared Online Scottsdale Edition sale,” David Gooding said in a news release.  “Although we miss interacting with our clients one-on-one and commanding the auction stage at our annual Scottsdale event, it is exciting to see such incredible engagement on our Geared Online platform.”

For more information and full results from the online Scottsdale auction, visit the Gooding website.