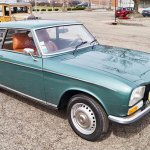 Now that the merger of Fiat Chrysler and Peugeot et. al. has been consummated, we thought it might be fun to pick a Peugeot as Pick of the Day. So, we searched the ClassicCars.com Marketplace advertisements and have selected this 1973 Peugeot 304 S hatchback coupe, which is being advertised by a dealership in Canton, Ohio.

While information about the car in the advertisement is scarce, we’ll supplement with stuff we learned elsewhere.

Here’s what the dealership says in the text of the advertisement:

“1973 Peugeot 304 S hatchback 2dr. coupe. Only one known in the United States. A delightful French sporty car you won’t see every day. No rust, no accidents. 1,288 cc. 4 cyl. coupled to a 4-spd floor shift manual transmission. 70,000 kilometers on odo which is equal to only 43,495 in miles. Nice metallic green paint over a great body. and recently reupholstered front seats. Owner’s manual and more.”

In the “Vehicle Details” section following that text we learn the interior is saddle tan vinyl with front bucket seats, the car has been “partially restored” and the engine is original to the car.

From The Standard Catalog of Imported Cars, we learn that the 304 was introduced in the US in 1971 and was Peugeot’s first front-wheel-drive car. The 1,288cc engine was rated at 70 horsepower.

The car looked much like the Peugeot 504, though on a smaller scale and with a 101.9-inch wheelbase.

Elsewhere on the web, we discover that the design can be traced to Pininfarina, and that the 304 was available as a coupe, sedan, convertible, station wagon and even as a van.

Of course, now that it has merged with Fiat Chrysler, who knows what products might be flowing back and forth across the Atlantic in the future?

The post Pick of the Day: Now that Chrysler and Peugeot have merged… appeared first on ClassicCars.com Journal.