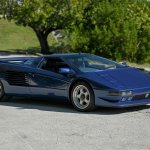 If you’re steeped in 1990s nostalgia, but think a Ferrari or Lamborghini is too common, this 1993 Cizeta V16T is for you. Scheduled to cross the block January 22 at an RM Sotheby’s auction, it’s one of just nine built.

Cizeta was the brainchild of former Lamborghini test driver and engineer Claudio Zampolli. After leaving Lamborghini, he moved to Los Angeles and started a business working on supercars of the city’s many wealthy residents. But Zampolli wanted to build his own car, and teamed up with music producer Giorgio Moroder to make that happen.

Zampolli specified a transversely-mounted 6.0-liter V-16, with a 5-speed manual transmission. The powertrain was cloaked in bodywork that resembled the contemporary Lamborghini Diablo, which makes sense, as Diablo designer Marcello Gandini also penned the V16T.

The supercar was initially marketed as the Cizeta-Moroder V16T, but the partnership between Zampolli and Moroder dissolved after the first prototype was built, so all production cars were branded solely as Cizetas.

The car currently for sale—chassis 101—was ordered by Singapore’s Hong Seh Motors on behalf of the Brunei Royal Family, according to the listing. The Sultan of Brunei was legendary for extravagant taste in cars, purchasing three of the nine V16T production models, along with thousands of other exotics.

Chassis 101 was shipped from the Cizeta factory in Modena, Italy, to Singapore in March 1993, but was never delivered to the Brunei Royal Family, according to the listing. Instead, it gathered dust at Hong Seh Motors for over 25 years, before being purchased by its current owner in 2020.

As a result, it only has 611 miles on the odometer, all of which are believed to have been accumulated during testing at the factory, according to the listing. The car is righthand drive, and has horizontal slats over its side air intakes like the prototype V16T, rather than the vertical slats used on most other production cars, RM Sotheby’s noted.

History is littered with failed supercar builders, but that hasn’t stopped new generations of dreamers from trying to launch their own supercars. Some are even turning to hydrogen or battery-electric powertrains.