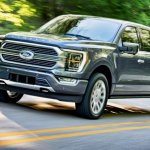 The Ford F-150 pickup truck continues to be the best-selling new vehicle in the United States, as well as in Canada. But what about the rest of North America, and for that matter, the rest of the world?

Once again, Budget Direct, an Australian automobile insurance company, provided a graphic display of the best selling new vehicles in nearly every nation around the globe. Note, however, that the information is based on 2019 sales.

Drawing numbers from the BestSellingCarsBlog website, Budget Direct reports that the top-selling new car globally in 2019, as it was for the previous 14 years, was the Toyota Corolla, with 1.48 million units going to buyers.

Statistics also show that Toyota was the most-sold brand in 41 nations, and in 16 of those countries that top-selling Toyota was the Hilux pickup truck.

So, what about North America? As you can see from the accompanying graphic, the Ford F-150 was No. 1 in the US and Canada. The Nissan Versa was the best-seller in Mexico and the Toyota Hilux was No. 1 with Panamanian purchasers.

And what of the rest of the world? What are the best-selling new cars on other continents? Stay tuned. We’ll share those in the coming days.