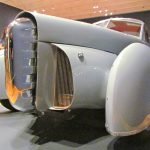 Concours d’elegance live up to their name by featuring some of the most elegant cars ever built. But what makes such events fun is the creativity of the promoters in devising special classes, such as micro cars or Can-Am racers or, in the case of the upcoming and 26th annual soiree on Florida’s Amelia Island, the “Weird & Wonderful” class.

“On May 23, 2021, one special class will highlight The Amelia’s fondness for embracing a broader perspective of the established and traditional concours concept,” the concours said in offering a sneak peak of the grouping. “To quote a well-known (and maybe even famous) car designer, “Hey, Bill (Warner), what kind of weird class are you gonna have in 2021?’”

Enjoying the reaction to its recent “Cars of the Cowboys” and “What Were They Thinking?” classes, Bill Warner and his crew will present “Weird & Wonderful.” Among the cars invited are the 1948 Tasco Prototype by designer Gordon Buehrig, whose idea for an American sports car was quite different than what you might expect.

Also to be showcased are vehicles such as Mike Vetter’s 2008 Extra Terrestrial Vehicle, the 1963 Corvair Futura built by Kaiser Aluminum, and the 2009 Monopoly Speedster, a full-scale car that looks just like the popular board-game token.

The Monte Carlo Rally is one of the highlights of the winter motorsports calendar in Europe. But while the FIA World Rally Championship event is taking place this week, though without spectators and with other health restrictions, the Automobile Club of Monaco has canceled both the 24th annual Historique and 5th annual Classique events that were to follow.

The reason: The resurgence of the coronavirus pandemic in France.

“We really had no other choice available,” Christian Tornatore, ACM general commissioner, is quoted in the announcement, “since the current situation does not allow to organize this regularity competition in its usual friendly and festive spirit. Since the DNA of the race is not guaranteed anymore.”

Racer/actor Steve McQueen got set on the right path in part because of time he spent at Boys Republic, a community for at-risk teenagers (boys and girls) in Chino Hills, California. To help raise money for the facility, the Friends of Steve McQueen car and motorcycle shows were established in 2008 by the Porsche 356 Club of Southern California. Show dates for 2021 are June 5 for cars and June 6 for motorcycles.

Following are dates currently set (but subject to change) for a variety of concours d’elegance, car shows and driving tours scheduled during 2021:

The post ‘Weird & Wonderful’ class at Amelia figures to be, well, weird and wonderful appeared first on ClassicCars.com Journal.