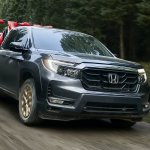 It appears the widely anticipated demise of the midsize pickup truck was overrated. Ford has done so well with its Ranger that it is expected to announce soon a second such vehicle, the Bronco-based Maverick. The genre also includes the Toyota Tacoma, Nissan Frontier and Chevrolet/GMC Colorado/Canyon, Jeep Gladiator, and on February 2, Honda will introduce its updated Ridgeline.

It also will have fully boxed “floor frame.” Honda says the new Ridgeline will come with the widest pickup bed and largest interior in the class, a dual-action tailgate, and in-bed trunk.

Several option packages will be available, including one from Honda Performance Development with fender flares and bronze-colored wheels.