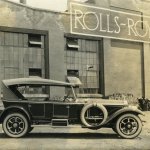 On January 17, 1921, a Rolls-Royce Silver Ghost rolled off an assembly line, but it wasn’t in Derby, England. Instead, that car and 2,945 that followed were assembled in Springfield, Massachusetts, USA.

“These Rolls-Royce ‘Springfield’ Motor cars benefited from the creativity of US coachbuilders including Brewster, Willoughby, Merimac and Hollbrook, and brought us some wonderful early commissions,” the British automaker noted in a news release celebrating the centennial of its American production effort.

From that start in 1921 and until the Springfield workshop closed in 1931 because of the Depression, 2,946 Rolls-Royce vehicles were assembled in New England. Among them were 1,703 Silver Ghosts, which joined the ‘Springfield Phantom’ in 1925.

Owners of the Springfield Rolls-Royces include President Woodrow Wilson, the Guggenheim and Bloomindale families, “and perhaps the most famous,” Rolls-Royce notes, “fictional Socialite Jay Gatsby with his 1922 Silver Ghost.”

After World War I, Charles Stewart Rolls’ partner Charles Johnson (Henry Royce lived until 1933, but was in ill-health after 1912), saw that the US market was in better condition than the British economy and saw assembly in the US as a way to avoid duties that made the cars even more expensive for American customers. So in 1919, Rolls-Royce purchased the American Wire Wheel Co. factory building in Massachusetts.

Building cars in America didn’t make them all that much less expensive. Prices ranged from $12,930 to $15,880, making the Springfield cars the most expensive of American-made vehicles.

The first 25 cars were produced entirely of imported parts, but afterward, the coachwork for the Springfield-built cars was produced in the US. Various American coachbuilders provided bodies. Rolls opened its own body-building workshop in 1923 and in 1926 acquired Brewster, a leading American coachbuilding firm whose work was popular with Rolls’ customers.

The post 100 years ago: Rolls-Royce rolls along assembly line in Massachusetts appeared first on ClassicCars.com Journal.