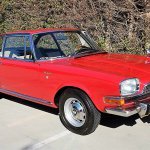 The Pick of the Day is a BMW that I doubt many people have ever heard of, much less have seen or experienced: the 1968 BMW Glas 3000GT, a limited-edition coupe designed by Pietro Frua and powered by a 3.0-liter V8.

Just 389 of these shapely cars were produced, according to the Woodland Hills, California, dealer advertising the BMW on ClassicCars.com.  They were originally manufactured by automaker Glas of Germany, which was bought out by BMW in 1966 so that this car wears BMW badges.

Frua was a renowned auto designer, best remembered for his Maserati styling.

“Not surprisingly, the car bears a strong resemblance to his other work of the period, most notably the Maserati Quattroporte, Mexico, and the glamorous 5000GT,” the seller notes in the extensive ad description.

“The specification was quite innovative and includes fully synchronized 4-speed gearbox, power steering, power disc brakes all round (inboard rear), and de Dion rear suspension,” the seller adds. “The engine was also remarkable for its sophisticated OHC construction and because it was one of the earliest applications of belt rather than chain actuated timing.”

The BMW looks incredibly tasty in the photo gallery with the ad, and the seller says it sports all of its original factory addons, such as front and rear foglamps, a Talbot side mirror and a Becker Grand Prix AM-FM radio. “All of these options are present today and in excellent condition.”

“This particular car has been comprehensively and beautifully restored,” the seller states. “It was kept in a museum in Munich for 28 years before being imported to the United States, and is truly stunning.”

As well as being rare and beautiful, the BMW is also totally practical for driving, the seller contends, which makes me dream of taking it on a long-distance classic car rally.

“The motor is throaty and responsive, and the brakes and gearbox make the car very usable in today’s traffic,” the seller says. “The suspension is compliant and the car feels sure-footed.

“This example is in exceptional condition and is ready to enjoy. Furthermore, thanks to its modern feel and genuinely practical back seats and trunk, it is truly usable, despite its formidable rarity.”

Formidable indeed, and seemingly well-priced at $150,000 for such an exclusive, attractive and drivable automobile.