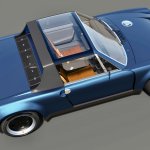 British specialist Fifteen Eleven Design is taking its update on the Porsche 914 into production, the company says in a news release. The design group is the classic and prestige car-building division of Mellors Elliot Motorsport, which competes in the World Rally Championship.

“The mid-engined, targa-topped roadster has been reimagined to feature a host of modern materials and elements, including a high-end performance braking and suspension system, Porsche Cayman 3.4S 6-cylinder engine and a 6-speed transmission,” the company said.

“Combining the classic yet often overlooked features of the Porsche 914 with innovative upgrades, the project will see bespoke examples available in both right and left-hand drive from their factory in Bakewell, Derbyshire.”

The news release noted that, “When not building rally cars for international championships, Mellors Elliot Motorsport has been commissioned to carry out a host of manufacturing ventures across the decades. With bespoke projects increasing recently, it has led to the firm creating a new brand to cater for the additional workload.

“Fifteen Eleven Design have been responsible for a series of pioneering projects, centered around the classic and resto-mod culture.”

Projects have included creating a Ford Escort Mk1 Speedster and restoration of a 1962 Maserati 3500 GT “Iniezione,” the later unveiled in 2020 at Salon Prive.

“Now, in the next phase of the firm’s expansion, a Porsche 914 will make it from the concept and graphic render phase to reality, marking the latest offering from the UK-based firm,” the company said. “The modern interpretation of the ’70s classic offers the highest specification of build whilst incorporating the latest technology to produce a uniquely superb driving experience.

“It has an impressive specification that should address the pitfalls of the original, whilst giving owners many technological advantages of today’s engineering and manufacturing processes.”

Pricing was not announced. For more information, visit the Fifteen Eleven Design website.