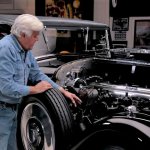 The series of supercharged Blower cars may be more famous when it comes to performance Bentleys from the pre-war era, but the 8 Litre built from 1930 to 1931 is more in sync with the cars the brand is recognized for today. We’re talking big, comfy cruisers with top speeds that put sports cars to shame.

The 8 Litre is powered by an 8-liter inline-6 good for about 220 horsepower, or enough to take the car to a top speed of 100 mph. Some examples with lighter bodies could go even faster.

Just 100 were built, and Jay Leno happens to own one that he fully restored and has featured in the latest episode of his web series “Jay Leno’s Garage.” As he explains in the episode, a lot of 8 Litres were chopped up and turned into hot rods. Even Leno’s example was abandoned in Chile and ended up becoming home to some chickens before it was rescued.

As a result, 8 Litres with their original bodies are hard to come by. Leno’s example features a body by Mulliner. Another example, one with a rare Gurney Nutting body, took out the Best of Show award at the 2019 Pebble Beach Concours d’Elegance.

Bentley itself owns an original 8 Litre, specifically the second example to be made. The car was the personal ride of Bentley founder W.O. Bentley, though he was forced to sell it just one year after it was built due to the Great Depression, which also led to the demise of the original Bentley and the brand’s eventual purchase by Rolls-Royce.

After trading hands a number of times through the years, the car was bought back by Bentley’s current owner, the Volkswagen Group, in 2006. To celebrate Bentley’s 100th anniversary in 2019, a slice of the original crankshaft from the car’s engine (the crankshaft had been replaced during a restoration) was used as decoration in a series of special Mulsanne sedans known as the Mulsanne W.O. Edition by Mulliner series.

The post Bentley built just 100 examples of the 8 Litre, and Jay Leno has one appeared first on ClassicCars.com Journal.