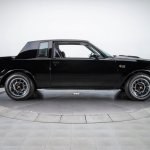 The Pick of the Day is a 1987 Buick Grand National, a remarkable time-warp example that has been driven only 33 miles since new and now offered by its original owner in Kansas City, Missouri, on ClassicCars.com.

The seller bought the car at Lust Buick of Aberdeen, South Dakota, the ad says, then kept it stashed in the garage.

“Purchased as a collector car from day one, this Grand National has only 33 original miles and is the kind of reference-grade classic that literally defines value,” states the private seller, who says the car was maintained in a temperature-controlled garage, was recently serviced and is ready for someone to start putting miles on it.

The Buick is powered by its signature turbocharged V6 engine that puts out 245 horsepower linked with a Turbo-Hydramatic 200R 4-speed automatic sending power through 3.42 gears, offering a combination of starting-line grip and high-speed cruising ability. The car is equipped with factory power steering, power-assisted brakes and chrome factory wheels with original Goodyear Eagle GT tires.

The car features the original GM code 19U Black paint that highlights the crisp, original sheet metal; it was the only paint color given to Grand Nationals between 1985 and 1987.

“Sinister, fast and highly desirable, this Buick is everything a classic muscle car should be!”

In 1981 and 1982, Buick raced its pedestrian Buick Regal in NASCAR’s Grand National series and took home the trophy both years. To capitalize on the success after grabbing the attention of American muscle car fans, Buick rolled out 215 examples of the Regal Grand National package in 1982 built with a naturally aspirated V6 engine that made 125 horsepower.

Fast forward a few years to 1984 and Buick replaced the Regal’s engine with a standard turbocharged 3.8-liter V6 that gifted drivers 200 horsepower. The Regal Grand National reached 235 horsepower in 1986, making it more powerful than the Chevy Camaros and the Pontiac Firebirds at the time.

Buick hit the jackpot with the Grand National in 1987 by fitting it with a stalwart turbocharged V6 that pushed 245 horsepower and 355 pound-feet of V8-slaying torque.

The asking price for this essentially unused Buick is $85,000 or best offer.