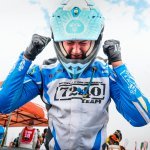 After more than 5,000 miles racing off-road around the Arabian Peninsula, the 43rd Dakar Rally ended January 15 with Stephane Peterhansel becoming the first person to have won the event on three continents.

Driving an X-Rain Mini for the JCW Team, Peterhansel won the car category with co-driver Edouard Peterhansel. It was the Frenchman’s 14th victory; he won six times on motorcycles and eight on four wheels. It also made him the first to win the event on all three continental venues on which it has been contested — Africa, South America and the Middle East.

“It’s still the same emotion for the 14th victory,” Peterhansel was quoted at the finish. “Like I said, to win the Dakar is always really complicated. There are no easy victories on the Dakar. There was a lot of pressure on the body. We felt every day that we had everything to lose, so it was complicated to manage, but in the end we did a really good job together with Edouard… It was a really incredible job, with good navigation but also, he was really calm.

“For sure, it is one or two more records for me: 14 victories, on three continents and also on the anniversary of my first victory 30 years ago today. It’s a long career in motorsport. Experience and being able to stay calm helped to win.”

Other category winners were Manuel Andujar of Argentina on a quad/ATV; “Chaleco” Lopez of Chile in the “lightweight” competition for Can-Am off-road type vehicles; Dmitry Sotnikov of Russia in the truck event; and Marc Douton of France and his dune buggy in the Classic category for vintage vehicles.

But everyone who finished the event certainly can claim satisfaction at the accomplishment, and this year that includes 19 who had to withdraw but were able to make repairs and were allowed to finish the route.