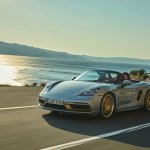 Porsche is celebrating 25 years of the Boxster with the 718 Boxster 25 model, the company announced on Tuesday. Limited to 1,250 units worldwide, the Boxster 25 is based on the 718 Boxster GTS 4.0 with its 394-hp 4.0-liter flat-6. It comes with either a 6-speed manual or dual-clutch automatic transmission and has a top speed of 182 mph with the manual.

The German luxury and sports car brand released the Boxster in 1996 in Europe and 1997 in the U.S. as the spiritual successor to the 914 from two decades earlier. Now, 25 years later, Porsche has sold more than 357,000 Boxsters and every owner has had fun behind the wheel.

The Boxster 25 plays off design cues of the Boxster concept car from 1993. Among those cues are the Neodyme copper color used on the front and side air intakes, badge lettering (including a special “Boxster 25” badge on the rear), and two-tone, five-spoke, 20-inch alloy wheels. Like that first concept car, the Boxster 25 is offered in GT Silver Metallic, though Jet Black Metallic and Carrera White Metallic paint are also available. Other exterior details include an aluminum-look fuel cap with a Porsche script, a Sport Exhaust system with high-gloss aluminum tailpipes, and a black windshield frame.

Inside, the Boxster 25 features a Bordeaux Red leather interior under a red cloth top just like the original concept car. A black roof and interior are also offered. “Boxster 25” lettering is found on the top and door sills, and the interior comes standard with 14-way power-adjustable seats, a heated steering wheel, and brushed aluminum trim.

Other standard features include adjustable dampers with a ride height lowered 0.4 inch, the Sport Chrono package with a digital and analog stopwatch and additional drive modes, and a mechanical limited-slip differential with torque vectoring.