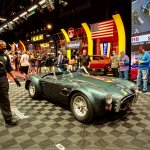 Carroll Shelby’s own 427 Cobra roadster, a car he owned from new until his death in 2012 at age 89, sold for $5.94 million January 15 at Mecum Auctions’ huge annual collector car sale in Kissimmee, Florida, the auction company reported.

“Shelby restoration expert Peter Klutt spent between 2,000-3,000 hours restoring the 1965 Shelby 427 Cobra Roadster that was built and owned for 46 years by Carroll Shelby, and it sold today in mere minutes for $5.94 million at Mecum Kissimmee 2021, the world’s largest collector car auction,” Mecum Auctions said in a brief statement.

The car features a couple of special changes made by Shelby, including a more powerful aluminum-head 427 side-oiler V8 engine and an automatic transmission that made it easier for the aging automotive icon to drive the car.

The post Shelby’s own 427 Cobra sells for $5.94 million appeared first on ClassicCars.com Journal.